Newmarket, ON -- (ReleaseWire) -- 02/08/2019 --With thousands of people struck by vehicles across greater Toronto in 2018, last year will go down as one of the worst ever for pedestrian deaths on city streets. On one single dark, wet evening in November, 17 area pedestrians were struck by vehicles in under four and a half hours.

Now a new Newmarket based umbrella company, LifeLight umbrella, is making its mission to help reduce these tragedies with what it bills as the world's first collapsible umbrella built exclusively for pedestrian life safety.

"There is no question our umbrella can save countless lives particularly during wet, low lighting conditions", says John Vickers, company president. "Pedestrian crashes are increasing in many urban centers across North America and it really is carnage out there on our streets. LifeLight Umbrella was a product idea I have had for some time and these increasing tragedies motivated me to bring that idea into reality."

Among the umbrella's unique features is a bright flashing led light on the roof of the canopy and two layers of high visibility light reflective trim designed to alert drivers of a pedestrian's presence from up to 140 meters (450 feet) away at 50km (30mph) speeds. In addition, the umbrella has a built-in led flashlight handle designed to light up a person's body and the ground in front of them. In non-precipitation conditions, the umbrella can also be carried as a flashing light stick.

Vickers adds that he also has incorporated additional technologies into his design which include a wind venting system to prevent the umbrella from collapsing and keep users safe when crossing windy corridors along with a technology pocket under the canopy designed to fit most common Bluetooth trackers. A tracker has the ability to inform users via their mobile phones they have left their umbrella behind at a premise. Vickers says feedback from early users of the product in both Canada and in the US has been extremely positive.

About LifeLight Umbrella
LifeLight Umbrella is a Canadian based company headquartered in Newmarket, Ontario area and was formed in 2018 to market a life safety umbrella invention created by the company's founder. The product is promoted as the world's first collapsible umbrella designed exclusively for pedestrian life safety by alerting drivers of a pedestrian's presence particularly in wet, low light conditions. The company currently markets its umbrella across the US and Canada and is looking to export the product to other countries. 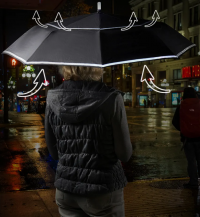