Unlock the Imagination with the Glowry Board

Creativity is everything. Everyone from authors to mathematicians could do well to keep a little creativity alive. Today the Glowry Board allows children around the world to be a bit creative.

Miami, FL -- (ReleaseWire) -- 11/17/2016 --According to a survey by Adobe Systems, eighty-five percent of college alumni who received a major believe that creativity was important to their success. * A sister of creativity, imagination, has also been revered both historically and presently. For example, Albert Einstein famously said "Imagination is more important than knowledge. For knowledge is limited to all we now know and understand, while imagination embraces the entire world, and all there ever will be to know and understand." Because of this vitality of creativity and imagination in the development and education of the world's children, Mongalo Designs has just released its latest product: the Glowry Board, a light up doodle pad for children to express themselves with. With the Glowry Board early learners can explore their own minds in a fun and interactive way.

The board itself works by using a professional-grade photoluminescent material, meaning that the material can absorb and retain light, giving the appearance of an ultra-bright glow. The result is a glowing drawing pad on which children can write on using an almost magical light wand. The glowing drawings stay bring for five to ten minutes before fading, allowing children to reuse the board to let their imaginations flow. This reusability lends itself to classroom settings as well as in home settings as no paper or chalk is wasted. Even whiteboard markers leave smelly residue which eventually builds up.

To ensure that the Glowry Board is both durable and reusable, the Glowry Board design team has paid the utmost attention to using the highest quality materials in the construction of the board. The writing surface is made from high-quality glow paper fastened to the durable board by a ultra-strong adhesive. Additionally, the board is framed by a rounded and brightly painted frame. This design ensures that children cannot scratch themselves on jagged edges. Unfortunately, a product with this sort of innovation and quality is difficult to produce without having orders already lined up. To remedy this issue the Glowry Board team has launched a crowdfunding campaign on Kickstarter. On the campaign page, visitors can pre-order a Glowry Board for an early bird discount alongside a set of imaginative and practical stencils, helping children learn the alphabet and more. With the support of readers, the Glowry Board will be able to enthrall children everywhere as it teaches children to be both creative and imaginative.

To learn more or support the Glowry Board visit the Kickstarter campaign page. 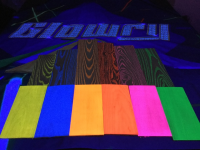