Brooklyn, NY -- (ReleaseWire) -- 10/03/2017 --Growing up can be scary – especially for children and teens who suffer from Obsessive Compulsive Disorder (OCD). That's one of the reasons a new film "UNSTUCK: An OCD Kids Movie," is screening in therapy and community centers across the U.S. and Canada for International OCD Awareness Week, (October 8 through 14). The 23-minute documentary examines the often-misunderstood mental health disorder and shows how six kids are facing – and fighting – some of their worst fears.

The film shows the human side of a disorder that affects more young people today than many may realize: According to the International OCD Foundation, about half a million children in the United States or approximately 1 in 200 children suffer from OCD. It usually makes its first appearance in childhood between the ages of 8 and 12. And, less than 10 percent of people with OCD actually seek treatment for the disorder that affects both the brain and behavior.

The documentary offers the perspectives of kids with OCD through the lens of two filmmakers who know it well: Both are the parents of children who are living with the disorder.

"As parents and filmmakers, we want to help kids and their families better understand OCD, feel less alone and give mental health professionals a tool to help demonstrate that it's possible to overcome the challenges," said the film's producer, Chris Baier.

During OCD Awareness Week, "UNSTUCK: an OCD Kids Movie" will be screened for free in multiple cities across North America, and it can be purchased for use in schools, colleges, libraries, hospitals, clinics, and other locations from New Day Films.

"OCD can be devastating for kids," said director, Kelly Anderson, "but it doesn't have to be. We hope our screenings and the awareness brought to life by OCD Awareness Week will help anyone who struggles with it to find hope and healing – and resources that help make life a little less scary."

Filmmakers, Kelly Anderson and Chris Baier and some of the cast will also take part in educational activities, including a live event discussing exposure therapy on the film's Facebook page on Monday, October 9 and in a number of Q&A panel discussions.

To contact the filmmakers or request a free preview, email unstuckfilm@gmail.com, or call 917-548-5629. A digital press kit, family resources, screening dates and locations, and more information about the film are all available at ocdkidsmovie.com. You can also connect with the film through Facebook and Twitter.

About "UNSTUCK: an OCD Kids Movie"
This is a short film that shows the challenges, realities and triumphs of six children and teens with OCD. In addition, two siblings also reveal the disruption that obsessions and compulsions have on the family. The documentary was finished in 2017 by Kelly Anderson and Chris Baier, who are both parents of children with OCD. Their mission is to fill a void in the mental health community with a story that shows the world that recovery from OCD is possible with therapy. The film premiered in July 2017 as the keynote presentation at the 24th annual International OCD Foundation Conference in San Francisco. 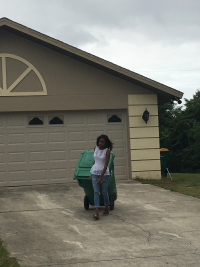