Studio City, CA -- (ReleaseWire) -- 02/05/2014 --Up In Arms Comedy, created by teen comedy actor Alex Dale, taps the talented and stylish Brittany Glodean to host the live sketch comedy series. Set to begin production this spring, "Up In Arms Comedy" takes a comedic slant on social issues from a teen standpoint. This series is written by members of the teen comedy cast.

Glodean is a triple threat. Not only does she have an incredible voice and iconic dance style, she has already experienced a successful acting career. Born into the spotlight, she is the granddaughter to the late great Barry White. She is also the granddaughter of Glodean White, the lead singer of the sensational singing female group Love Unlimited, that was produced and created by Barry White. Recently, Brittany Glodean was cast as the lead in Dylan Allen’s “Get That Girl” music video released exclusively on RyanSeacrest.com in December 2013.

"Brittany is both hilarious and inspirational - which makes her the ideal host as we revamp the show for a high school/college demographic. She is extremely talented with a grounded personality and a comedic style that Up In Arms viewers will enjoy," said Dale. "With Brittany's humorous improv skill set, Up In Arms Comedy viewers will see our sketches in a fresh, fun and satirical way."

Inspired by the Saturday Night Live, Up In Arms Comedy brings sketch comedy to a younger audience from a teen standpoint. This new series will spotlight contemporary teen culture in a comedic live action sketch parody platform. As host, Glodean will introduce the sketches while she provides relatable, funny and sitcom style glimpses of behind-the-scenes action while incorporating fun technology into the mix.

"I am sooo excited about joining the cast of Up In Arms Comedy, especially being able to host! Everyone involved is really talented and they are so fun to be around so I can't wait to start this new journey!," said Brittany Glodean, who also hosted the Up In Arms Comedy annual red carpet fundraiser for Children’s Hospital Los Angeles in December 2013.

"Up In Arms Comedy" is produced by Mom Brigade Productions with music production by Andrew Lane, Drew Right Music. Lane is a triple-platinum music producer and Senior Vice President of record label, Blast Music (Beach Boys, Miguelito, T-Pain). Lane’s knowledge and experience is well suited for Up In Arms Comedy as he has a great deal of experience creating music for both television projects and music artists. Andrew Lane has worked with some of the industry's hottest superstars such as Dave Hollister, Chyna White, Backstreet Boys, Young Bloods, Dogmatic of the 8 Mile Shady Family & Irene Cara. As Producer/Songwriter, he has received gold and platinum sales for his work with R&B mega-artist, Keith Sweat, and on platinum selling records High School Musical, Hannah Montana, Disneymania 4 and Manny Fresh. As a leader in the music industry, Lane continues to produce with the industry's rising talents by producing/songwriting projects for the Universal, Elektra and EMI labels. 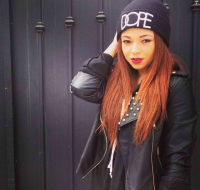 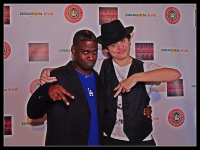