VehiGo, the Foldable Electric Scooter of Alllu, Is Going to Hit the Market with Its Reliable Safety

Panyu, Guangzhou -- (ReleaseWire) -- 06/27/2018 --Alllu, the corporation which has been launching different kinds of transportation tools since it was set up, released its first three-wheel electric scooter called VehiGo on Kickstarter.

Being innovative is one of the principles of Alllu. "Launching a new product to the market is easy, but making it stand out is not that case. The priority is to chase the superiority in order to make a difference and add the uniqueness to our product, and that's the thing to catch the heart of the target customer", the CEO of Alllu, Zhao Dan said. Now VehiGo's emergence embodies this concept for it has its distinctive characteristic---the unique design for safety. Being equipped with three wheels and adopting the triangular design, the riders can feel free to stand on the feet plate and keep their balance even without holding the handlebar, and it can avoid side turnover as well, making driving more easily. In addition, it has the property of differential balance, which could contribute to the strong adaptability to various situations occurring while riding.

For instance, when encountering suddenly turning or slowing down, the speed of it could be adjusted in time because it can coordinate with riders' action, which means the rider just needs to move his or her body to control the direction. Thanks to its design of double drum brake, riders can stop whenever they want and this enables the immediate reaction when in danger. Besides, two sensitively corresponding brake lights are connected to brake lever and a bright led light can be switched on at night, which adds to safety too. Aside from that, the tyres have the sparkling point for that it can discharge the water and what's more, grab the ground effectively, which could prevent being slippery. Another trait is being extremely waterproof, therefore; the rider does not have to be upset about it when on rainy or snowy day. One more pleasing function is that there is a BMP battery protection, by which the user's safety of charging can also be guaranteed. Alllu believes that only when the basic safety of riding e-scooters is achieved can the users have an enjoyable and reassuring diving experience.

In addition, VehiGo also possesses other extra sparkling selling points as followed: Quick charge. VehiGo can be completely charged with 15 minutes High flexibility. It can move forward or backward at ease by its function of 360°limitless steering. Smart functions. GPS positioning, anti-theft, recording scenery,etc. Excellent portability. Being folded in nearly 1 second, it could be carried wherever you are. Alllu's VehiGo has been launched on Kickstarter with the lowest price at $649 since June 5th,2018.

About Alllu
Being founded in July, 2015, Alllu has been dedicated to the product research and development of tranportation, sticking to the principles of innovation, concentration, superiority, simplicity,etc. It has somehow changed the means of travelling around among its supporters, especially being known for its boldness to be creative, and this could be backed up by this time's launching of VehiGo, which is going to be a milestone of Alllu's product development. 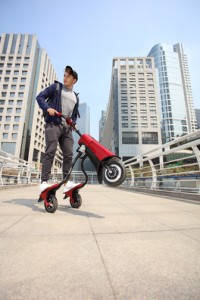