Venom Introduces the Next Generation BlackBook 15 – The Thinnest, Lightest and Most Powerful BlackBook Ever

Melbourne, Australia -- (ReleaseWire) -- 12/30/2014 --The BlackBook 15 has changed over 95% of its components reducing its weight by an incredible 25% and its overall height by 45%. Now featuring the latest generation NVidia 900 generation GTX powered graphics card, a 15" 3K Anti-reflective Venom Vision IPS panel for stunning colour accurate visuals, lifelike video and incredibly sharp text accompanied with a new powerful Sound Blaster X-Fi audio processor with Dolby digital 5.1 surround sound and 3D headphone support and Onkyo speaker platform. "An uncompromising audio visual experience can only be delivered by an incredible combination of engineering and purpose to appeal to all the human senses, anybody can put a high res screen on an underwhelming PC, what's important is purpose, achievement and the ability to push the boundaries in all the components that add up to one homogenous performance system" said Jaan Elturan, Venom's managing director and chief designer.

Engineered for unmatched performance, the BlackBook 15 has the latest high speed SSD drives achieving up to 1170 Mbps with the ability to have up to 4 drives, a high end Intel Quad Core i7 processor with turbo boost and up to 32GB's of high speed – low latency impact RAM. "Power only translates to performance if it is delivered reliably and consistently, this is how we can make the best Microsoft windows computer in the world" said Elturan "we believe that the software and hardware combination must compliment the personal computer user's abilities and expectations in achieving the ultimate culmination between man and machine. This is how we make windows look great, by customising and combining the software and operating system interface with the ultimate hardware and design which then allows our customers to push the limits of their imagination".

Designed around a unibody enclosure of anodised aluminium for reliability, cooling and a reassuring feel. Thermal management has been optimised with the intelligent three fan, twin cooling system which operates independently in regulating either the CPU temperature or the GPU temperature. Depending on the task at hand, when running office applications, designing or gaming either or both cooling systems will be efficiently running, ensuring that noise levels are at a minimum, cooling is at its optimum and sustained performance is always delivered.

Endless connectivity options have been incorporated in the BlackBook 15 – as standard. From the ability to incorporate 4G LTE with an external SIM card slot, to 2 mini display ports to support two external 4K monitors giving 400% more video output than the previous generation and multiple USB 3.0 ports and other legacy ports such as HDMI, eSATA and gigabit LAN. Dual mode Bluetooth 4.0 and dramatically faster Wi-Fi speeds up to 867 Mbps and broader coverage with 802.11 ac/a/b/g/n wireless 2.4GHZ/5GHZ. Seamless integration into all devices across all platforms has never been more achievable.

Not only is it beautiful on the outside to look at the newly designed ultra-responsive illuminated keyboard has the perfect feel and response for efficient and accurate typing. Full control over programmability offers a competitive edge for the dedicated enthusiast or gamer. Multi-touch inputs on the large 107 X 62 mm touchpad ensure long distances on the screen are always within reach and precision gliding capabilities like zooming in are a breeze with its smooth surface.

As with all Venom BlackBooks this Venom also comes with a full 1 year subscription included internet security, malware protection and antivirus software suite, "The freedom of windows no longer has to come with a price, what makes windows so open, tweakable and accessible is also at the same time its Achilles heel, we have rectified this by providing every BlackBook with a full version of antivirus software protection and 12 months subscription included" stated Elturan. System recovery software and the factory image is also installed on an external USB 3.0 drive as provided with all BlackBooks allowing an incredible full system recovery in just 12 minutes. Gone are the troubles of having your windows recovery partition on the actual hard drive which is lost when an upgrade is performed or if the hard drive fails.

"In a world where the average smart phone can do many things better than the average PC, only a great PC has meaning and purpose. We have proudly been able to present this manifestation in the form of the Venom BlackBook 15 notebook PC to the world today" concluded Elturan.

Venom authorised retailers are able to configure to order at the time of sale. 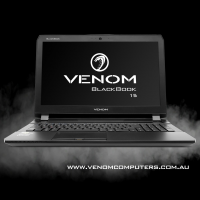