Philadelphia, PA -- (ReleaseWire) -- 07/22/2016 --Summer once meant the unmistakable call of the ice cream truck, the bitter odor of chlorine, and flashes of fireflies across the endless night sky. One day, summer morphed into endless 40-hour work weeks and lawn maintenance. Vesper Restaurant invites people to reclaim their summers with Vesper Hour, a refined summer event for the child at-heart. After other bars and restaurants close up shop, Vesper keeps the party going with their late night happy hour, Vesper Hour, from 7:00pm to 10:00pm every Wednesday night. After the sun sets, the intimate restaurant creates a relaxing, removed oasis for appreciating the complexity of a cocktail, every fresh ingredient, and absorbing conversation.

A modern-day twist on the traditional supper club, Vesper views an evening out an as experience to be cherished and offers dinner, drinks, and live music seven nights a week. Recall summer nights spent staying up late into the night while sipping sophisticated cocktails created by Vesper's experienced and amiable bartenders. Vesper is known for their 'classic cocktails without the twist,' familiar favorites carefully crafted with high-quality ingredients and liquor. Every week Vesper Hour features a speciality featured cocktail for $8 alongside their $6 food specials, $6 classic cocktails, and $6 house wine specials. In addition to their food and drink specials, Vesper is causing a stir by offering an exclusive giveaway of a different $500 designer bag each week.

For the adult unwilling to sacrifice their summer, Vesper Restaurant is excited to present a late-night happy hour with elegant drinks, delicious food specials, engrossing conversation, and even a $500 designer bag giveaway. With Vesper's growing reputation throughout the foodie city, the Vesper Hour falls in line with their dedication to creating unique and fulfilling nights out even during the week. The Vesper Hour will be an opportunity for new and familiar patrons to enjoy Vesper's gourmet food and complex cocktails for a discounted price later at night. Rather than let summer days and nights bleed into each other, Vesper invites adults to take a time-out from their week work with a reason to celebrate on Wednesday nights all summer long.

About Vesper
Vesper was founded in 2015 by owners Brendan Smith (Smith's Bar and Restaurant, Milk House), Chuck Ercole (Misconduct Tavern), and John Barry (Smith's Bar and Restaurant) as a space for today's connoisseurs to enjoy a leisurely meal. In its past life as a speakeasy, Philadelphia's brass would meet here in its underground cavern room to strike off-the-record deals. This history still resonates throughout the restaurant, recently revitalized into a refined hideaway in the heart of Center City at 223 S Sydenham Street. 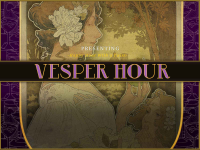