WeHireHeroes.US Has Recently Been Officially Given the Title Of America's Best Job Site for Veterans.

Saint Petersburg, FL -- (ReleaseWire) -- 05/06/2014 --The results of a recent web-based poll during which respondents were asked to recognize the top veteran website online generated what some would call a predictable end result; WeHireHeroes.US was chosen by a clear majority over all the other recognized names on the Internet.

The survey and the subsequent naming of Best Veterans Job Site was started after an intense debate blossomed over just where employers should post jobs for veterans. Which of the top military job sites would be able to lay absolute claim to that title? In an effort to help keep the competition fair to all, the competition was performed online and the winner was decided upon by ex-military job seekers, recruiters, and veteran-friendly employers themselves.

Employers asked about the survey seemed to have mixed responses to WeHireHeroes.US's claiming of the prestigious title, varying from mild disbelief that one military veteran job site could be so dominant, to enthusiastic agreement with the selection that veterans, HR specialists, and hiring professionals had decided on.

Dan Tong, producer and host of the DTong Radio Show out of Denver, Colorado, was among those who agreed. "I highly recommend this business and site to help connect employers and veterans," he praised. "Awesome work!"

WeHireHeroes.US was identified as Best Veterans' Job Site by military veterans and human resources personnel alike in large part because, unlike almost all of their competition, there is no sign-up required to view open positions. This alone made WeHireHeroes.US the clear favorite of military members re-entering the civilian job force. "Veterans absolutely hate having to set up a new account and memorize yet another password just to see what jobs are available", said one participant.

"And WeHireHeroes isn’t just a job board. It also contains a real career resource center with tons of articles, coaching, support links, and even an online game room for when you need a quick break. There’s no other site quite like it for helping veterans find jobs."

After the overall results were in, Lance T. Walker, Managing Director of We Hire Heroes, was understandably delighted. "I didn't even realize there was a poll going on", he said. “But as an Air Force veteran myself, I like to think we have a better handle on how veterans feel about the process than most of our competitors do. Veterans aren't just a marketing demographic to us. They're a family of men and women who have taken extraordinary steps and made remarkable sacrifices to defend this country, and the last thing they should have to do is come home and fight for a job."

Mr. Walker was also overheard saying, "Employers and recruiters are constantly telling us they'd love to hire more veterans, but they just don't know how to reach them. By pairing our job board with our huge social media network, we are able to give companies unprecedented access to the veteran community and help them solve this problem. I am truly enthusiastic about our plans for 2014 and beyond, as more of our heroes return from overseas. Being acknowledged as Best Veterans' Job Site is not just an honor, it is also a privilege. My thanks to all who took part in the vote. Rest assured, we've only just begun!" 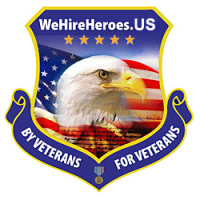