San Antonio, TX -- (ReleaseWire) -- 12/22/2020 --Mick Simonelli, a noted thought leader and consultant in the field of organization innovation, today announced the publication of his new book, Victory Disease: Why Great Organizations Fail and How to Innovate Before It's Too Late. Based on Simonelli's extensive experience advising large corporations, the book explores why and how a business can crumble or stagnate even as it appears to be at the pinnacle of success. The problems can arise out of a lack of innovative thinking or self-worship in the wake of big accomplishments.

"What can happen with a successful company is a tendency to become geared toward the status quo," Simonelli explained. "This, in turn, perpetuates groupthink and the belief of invincibility. Successful organizations can easily fall into the trap of rewarding risk-averse behavior, where new ideas are minimized or killed to avoid disrupting previous winning ways."

Simonelli added, "It can be a challenging assignment to tell leaders of a big, booming business that they are headed for disaster if they don't change, but it's essential for survival, especially today. The digital economy turns winners into losers in the blink of an eye." According to Victory Disease, it is possible to pull out of this trap, but it takes focus and an awareness that a problem exists.

The concept of victory disease first arose in the military to describe the paradox of the Japanese military in the second world war. Having experienced some of the greatest victories in the history of warfare, the nation, along with its army and navy, felt they were completely invincible. These groups became mired in bureaucracy. Hardly able to look toward the future, they remained enamored with past successes, achievements that had become outdated and irrelevant over time. The result was an epoch-defining catastrophe. Businesses can find themselves experiencing the same syndrome.

The book explores how today's hyper-innovation environment rewards companies that can develop new products, services and solutions that create differentiation. "Modern organizations must continuously produce new value to stay on top," Simonelli remarked. "Yet, many established companies remain stuck in the circumstances of their current success. This is a big mistake. A successful organization must continue to change and adapt . . . or die." Victory Disease prescribes an antidote: a practical remedy for renewed organizational health and longevity.

Victory Disease is available in print and ebook formats on Amazon.com.

About Mick Simonelli
As the leader of Simonelli Innovation LLC, Mick Simonelli has a reputation for being a dynamic thought leader on innovation in large organizations. Prior to Simonelli Innovation, he served as the senior innovation executive for USAA, where he built and drove the enterprise-wide innovation program to world-class status. During his tenure, USAA received numerous awards and accolades, including being recognized as one of InfoWeek 500's most innovative and BusinessWeek's #1 customer service. Earlier in his career, Simonelli served as a lead innovator in multiple positions within the Department of Defense, where he helped digitize and transform the US Army. He is a certified management accountant, possessing advanced degrees in business and psychology. 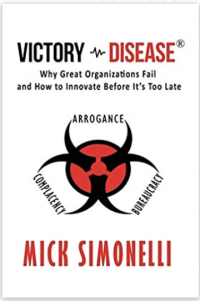