In No More, a Conservative President Provides Solutions to America's Toughest Issues and Takes Back America

Atlanta, GA -- (ReleaseWire) -- 11/02/2016 --In No More, Dr. Thomas Masters, a Vietnam veteran, tackles some of America's toughest and most controversial issues. A Conservative and devout Christian, Dr. Masters, like many Americans, felt disillusioned by the current issues plaguing America. Dissatisfied with government, politicians, and the state of the nation, Dr. Masters felt he could make a valuable contribution by creating a novel that directly addressed many of these conflicts.

"I have been a conservative Christian all my life," explains Dr. Masters. "I have witnessed the progressive departure from a Christian nation to something I do not recognize today. I do not have a desire to run for public office, but I thought this book would be the next best thing. Hopefully, someone in the public realm will take some of the suggestions noted in the book and act on them."

About No More
In the book, No More, a conservative president delivers a presidential speech to the American public each day during his first one hundred days in office. Guided strictly by the Bible and the United States Constitution, the president provides answers to many of America's most probing questions. The content covered within the novel could not come at a more pertinent time, as the 2016 presidential election approaches in November.

"The presidential race this year in 2016 is extremely pivotal in the course of our nation," shares Dr. Masters. "The past eight years have seen a dictatorial presidency and a runaway judiciary. The election in 2016 is as significant to the future of our nation as was the election in 1860. This book addresses many of our nation's problems, and offers concrete solutions to those concerns. Many solutions may seem drastic, but I think most will see the rationale behind them."

No More is available on Amazon.com, BarnesandNoble.com, Kobo, Apple iBooks, and wh2107.org. 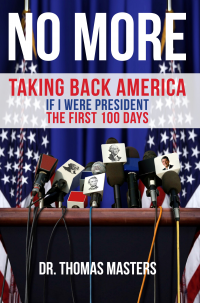