"Vigilantes", the New App Taking on Terrorism, Mass Shootings and Crime with the Power of Social Media

Braunschweig, Germany -- (ReleaseWire) -- 03/06/2018 --Vigilantes, the revolutionary new app harnessing the power of the social media to counter terrorism and mass shootings, is live on global crowdfunding platform Indiegogo and raising funds to bring the project to life.

In today's dangerous world where mass shootings and acts of terrorism seem to happen almost every week worldwide, the world feels like a more dangerous place. Since 9/11, more than 28,000 acts of terror have been committed and they seem to grow more heinous every time. Vigilantes is the first app to utilize the power of the social media to counter these growing threats.

"As recently as February 14, 2018, 17 people (mostly kids) died from a mass shooting at a school in Parkland, Florida," says co-founder Leonel Chama. "That is why we created Vigilantes as a social media platform to combat this growing menace. By uploading a simple post, an attack can be prevented or thousands/millions of people are notified in real-time to stay safe."

Vigilantes is a powerful app that utilizes the community to help others stay safe. Before, during and after an incident occurs people are able to warn others within the app. The location of the incident is then shown on the app while other app users are notified to stay safe. Law enforcement is also informed in real time as well. Vigilantes rounds up all the information shared by users of the community in real time and gives users safety alert reports of their current location, even suggesting safer areas to access in the vicinity.

Furthermore, future crimes and terror attacks can also be thwarted with Vigilantes. Users can utilize the app to alert others of suspicious behavior in an area and the place and description uploaded to the app for others to see. Law enforcement is then notified and the suspicious individual is caught before the crime is committed.

Vigilantes take safety a step further by providing a significant tool to utilize during natural disasters. After a disaster occurs, the app allows users to pin their exact location on the map, allowing rescue teams to easily locate them for extraction. Vigilantes also provide instantly access to information about nearby emergency services and facilities.

Furthermore, Vigilantes provides a robust social experience that allows users to chat, post, upload, share and more. Vigilantes is unique because it connects users with their friends, family and tracks what is happening around them in real-time.

"Did you know that if the world stands together as a community, we can defeat terrorism, mass shootings and other crimes?" adds Chama. "The call for smarter ways to fight terrorism, mass shootings and other crimes has never been more important with famous world leaders encouraging the world at large to find better and innovative approaches in dealing with this menace. As Barack Obama famously said, "Let's be vigilant, but not afraid.'"

Vigilantes is currently live in beta for Android on the Google App Store and available to support on Indiegogo: http://bit.ly/2oD4hf6.

About J&A Bureau
J&A Bureau is a start-up with a strong focus on using Technology for the well-being of People and Planet. Their first product, Vigilantes App, was borne from the search of a smarter way in solving the growing menace of terrorism, mass shootings and other crimes. 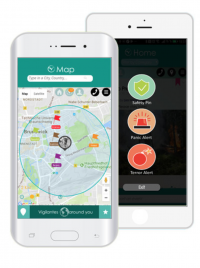 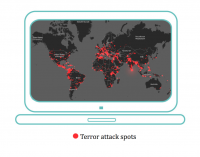