“The Indians set a high value on their white earth: however I sent for a linguist, and after strong talk which lasted near four hours, we settled matters….” Thomas Griffiths, 1767

Franklin, NC -- (ReleaseWire) -- 04/27/2012 --It was 1987 and we were riding our horses along highway 28, when we first saw the marker: “Wedgwood….several tons of clay taken on 1767 from a nearby pit by Thomas Griffiths…..” Intrigued, we talked about someday visiting the white clay mine. We didn’t know finding the mine would not be easy.

Historically, Macon County was a center of Cherokee Kaolin clay mining and our first step was reading a copy of the Thomas Griffiths 1767 original journal, which is in the Macon County Public Library. Thomas Griffiths came over from England in 1767, as a representative of Josiah Wedgwood. Kaolin clay was needed by Wedgwood to make his fine Porcelain. Griffiths, however, left no map on where he got the 5 tons of clay he took back to England.

We talked with Russell Townsend, Tribal Historic Preservation Officer for the Eastern Band of Cherokee Indians, and he explained the importance of Kaolin clay to the Cherokee. It was used, Townsend said, for game tiles, tobacco pipe production and as slurry for the interior and exterior of homes. Mica deposits nearby meant mica frequently got into the slurry mix. The mica made the Cherokee homes sparkle like diamonds.

Josiah Wedgwood in England dreamed of large scale manufacturing of the best pottery in the world. He used unique glazes and classical designs from Roman and Greek periods. Orders for Wedgewood came from the rich and royal. Empress Catherine and Queen Charlotte were customers and Wedgewood labeled one of his lines, “Queens Ware.” He had found the best Kaolin clay came from the mine in what would become, Franklin, NC. Several years later, he found a source of clay in England but “White Unaker” from Franklin had already revolutionized Wedgwood pottery.

There is disagreement about the original location of the Cherokee mine that supplied Griffiths Kaolin but most think it to be in the Iotla area. After studying maps and talking to those with extensive family history in Macon County, Gordon located a disabled veteran, whose relatives had worked the mine. Following the veteran’s directions, Gordon found himself at Jerry Anselmo’s place, “Great Smoky Mountain Fish Camp and Safari’s” on the Little Tennessee River. Anselmo became aware of the Kaolin mine on his property, when he moved to Franklin 22 years ago. Thomas Rickman of Rickman’s store told him about the mine, and believed it was the original Cherokee mine and the source of Kaolin for some early Wedgwood pottery.

Jerry drove us near the mine site in his jeep and we hiked the remaining distance. Large quartz boulders line the way and stand at the entrance of the mining area. At the mine site, we were enchanted by the white clay cliffs and ground sparkling with mica and Kaolin. It was a perfect Indiana Jones movie setting.

Jerry Anselmo is a gracious host and we were impressed with his conservation orientation. Before moving to Franklin, he worked with Jacques Cousteau on the Save the Dolphins Project. He has partnered with the Little Tennessee Land Trust on development rights on some of his land holdings linked to the Cherokee. As we were leaving, Jerry promised a tour for our grandchildren and gave us samples of Kaolin for our mantle.

Did we find the lost mine? We are certain we did. Jerry Anselmo had also received confirmation through conversations with some of the relatives of the first Europeans to arrive in Franklin, who knew many Cherokee Indians.

Displays of early Wedgwood pottery would be nice in our region. For more information, Barbara McRae’s extensive research on Franklin’s Kaolin clay history and links to Wedgwood pottery can be found at the Franklin Historical Museum. We enjoyed comparing our ideas and notes with Barbara’s on whether Franklin area Kaolin clay arrived in England before the 1767 Wedgwood expedition. We all agreed this is very probable and will be an interesting area for future research. 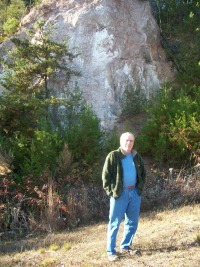 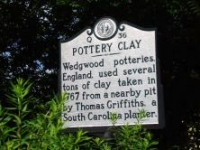 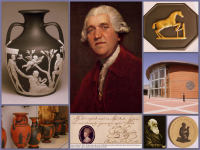