New York,, NY -- (ReleaseWire) -- 11/28/2014 --After seeing Well-Strung’s debut music video, Kristin Chenoweth, Tony & Emmy winning star of Wicked and Glee, invited the group to appear in her two sold-out Provincetown concerts this past August at Town Hall. The group just posted their stirring performance of Leonard Cohen’s Hallelujah on their YouTube channel with an introduction by Chenoweth.

In October they were featured in Tony-winner Joanna Gleason’s critically acclaimed new show in New York at 54 Below and New Orleans at Le Petit Theatre. Last week they shared the bill with Broadway performers Norm Lewis, Sierra Boggess and opera star Deborah Voigt in a star-studded lineup directed by Richard Jay-Alexander to open Orlando’s new Walt Disney Theater. Well-Strung has just launched their second national concert tour. In the past six months they have performed on NBC’s TODAY Show with Kathie Lee & Hoda and Andy Cohen’s Watch What Happens Live. The New York Times writing about the group’s current show said “Well-Strung, a talented quartet of men who sing and play string instruments - got its start in Provincetown and brilliantly fuses pop and classical music from Madonna to Beethoven.”

The group also had their first major magazine cover spread in Metrosource. They have been referred to as “absolutely amazing” by BBC Radio host Jo Good during their London debut, and as “the hottest thing with a bow since Jennifer Lawrence in The Hunger Games” by the New York Daily News. The new show POPssical, written by the group and directed by Broadway veteran Donna Drake, features new arrangements of songs by Mozart, Beethoven, Ravel, U2, Miley Cyrus, One Direction, Madonna and more. The four group members are Edmund Bagnell (first violin), Christopher Marchant (second violin), Daniel Shevlin (cello) and Trevor Wadleigh (viola). Arrangements are by David Levinson with additional arrangements by Bruce Carter and Well-Strung. The group was conceived by Mark Cortale and Christopher Marchant.

Well-Strung first began performing together in a workshop production of the show directed by Ms. Drake at Ars Nova in NYC on February of 2012. That same show sold out at Joe’s Pub in May of 2012 before having an extended debut run that summer at The Art House in Provincetown, MA and playing Off-Broadway at the Marjorie S. Deane Little Theater the following fall. Recent highlights include making their debut on London’s West End at the Leicester Square Theatre, performing at Vienna’s LifeBall on the same bill as Kesha, and returning to P-Town’s Art House theatre in 2014 for a their third consecutive summer-long premiere of a new show. The foursome’s debut album was released on Twist Records and was produced by Matt Farber (Founder of LOGO Network) and Mark Cortale. The music video for their “mash-up” of Mozart meets Kelly Clarkson debuted in the summer of 2013 and has been featured in the Huffington Post, ABC Television, and many other media outlets.

About Mark Cortale Productions:
Mark Cortale (Artist Manager & Producer) is the Producing Artistic Director at The Art House in Provincetown, Massachusetts. In his inaugural season in 2011, he founded the Broadway @ The Art House series featuring Seth Rudetsky as host and pianist. The artists he has presented on the series to-date have included Broadway superstars Patti LuPone, Chita Rivera, Sutton Foster, Audra McDonald, Megan Mullally, Megan Hilty, Jane Krakowski, Cheyenne Jackson, Christine Ebersole, among others. He also co-founded Well-Strung, The Singing String Quartet and has produced their hit shows, each directed by Donna Drake, throughout the US, and in the U.K. and Australia. In 2012 Mark produced the feature film Varla Jean and the Mushroomheads and launched Seth Rudetsky’s new Broadway-themed web network at www.SethTV.com. Over the past three seasons he has produced the Broadway @ series in Provincetown, New Orleans, Australia (with Megan Mullally), London’s West End (with Patti LuPone), Los Angeles, the Poconos, Fort Lauderdale, San Antonio, Hartford, Detroit and just announced in San Francisco. 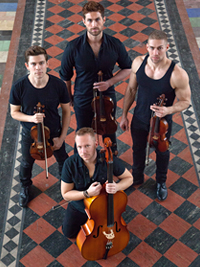