Westmont, IL -- (ReleaseWire) -- 12/06/2018 --A crowd of almost 200 engaged community leaders and guests came together to celebrate community and education at the annual Westmont Holly Days Winter Ball, presented by the Westmont Chamber of Commerce and Tourism Bureau. The crowd size was larger than previous years and was well attended with representatives of Westmont government, local businesses, nonprofits, educational institutions, as well as special guest, celebrated Chicago artist Corey Jenkins.

The event featured a live art performance by Mr. Jenkins in support of his inner-city art and music program, V.O.I.C.E. (Validating Our Inner Creative Expression). The program is meant to inspire children and adolescents on Chicago's south side, in areas that often place children at risk with violence and crime. But for a lucky few, this after-school program has stepped in to make a difference, offering music performance and producing instruction as well as an introduction to entrepreneurial classes meant to inspire children to believe in a brighter future.

The art performance was a community effort as guests of the gala including Westmont Mayor Ron Gunter as well as Village Trustees were invited to paint on the canvas to lend a sense of community to the creation. The artwork was then live auctioned, and the bidding was lively and won by Paul Stark, former owner of Oakbrook Racquet and Fitness Club in Westmont. However, in a surprise turn of events, Mr. Stark relinquished ownership of the artwork to second place bidder, developer Drew Mitchell, of Holladay Properties with a special offer that he couldn't refuse. Both men then agreed to combine their bids thus effectively doubling the money raised to support the V.O.I.C.E. and Westmont's scholarship program. " My winning bid was in support of Corey Jenkins' work with children at risk. I was glad to let Drew have the artwork to hang in the lobby of his new development in downtown Westmont so that we could both contribute to this vital cause," said Mr. Stark.

"Our goal was to bring together our community in support of Mr. Jenkins' V.O.I.C.E. program in a fun, creative and entertaining way," said Executive Director of Westmont Chamber of Commerce and Tourism Bureau, Larry Forssberg. "We were delighted with our guest's participation but also how generous and selfless our bidders were; it was a win-win situation for everyone" Mr. Forssberg added.

Other activities enjoyed by the gala guests included a holiday dance performance by Westmont's own Dynamic Dance Perception Dance Company, and music and dancing were provided by the band Sundance.

About Artist Corey Jenkins
Presented the "Mission Award" in 2016 from the Chicago Leadership Alliance for his outstanding devotion to building community and empowering youth through the Arts, Corey Jenkins is the embodiment of "making a living" with purpose. A Chicago native raised in the Chatham neighborhood, Corey Jenkins is a multidisciplinary Teaching Artist with twenty years of experience. An advocate for community outreach and engagement through arts integration, Corey is best known for teaching youth and young adults how to use technology and mixed media to express themselves through visual and performing arts creatively.

About the V.O.I.C.E Program
V.O.I.C.E was created to help young people from underserved, marginalized communities find themselves through STEAM based educational initiatives. In our programs, we offer one-on-one and small group mentoring to help students explore entrepreneurship and artistic expression.

Our after-school programs cater to middle and high school adolescents looking to cultivate their creativity and explore their talents in a positive, safe environment. Through V.O.I.C.E we hope to provide top-tier experiential programming to help at-risk youth find their identity while being creative and building community.

Our vision is to grow and expand our programs to more schools and communities throughout Chicago's most challenging neighborhoods to bring change from within our communities. 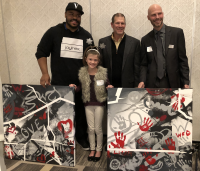