Why Goliath Companies are Collapsing

After traveling in 78 countries and working abroad, the former GE and Citibank senior executive concludes in her new controversial business book "America's Corporate Brain Drain" (Sparks Worldwide, August 2008, ISBN 9780981494708, hardcover, www.braindrain.biz), "We're moving forward with Toyota and connecting with Nokia because, in the U.S., the brightest sparks have either left big corporations or are planning their exit strategies. Big business has lost their minds."

From annoying phone menus to nickel-and-diming airlines, from gouging gas prices to "free" checking accounts that charge for checkbooks, big companies are disconnected.

Ryan says, “You would think that managers would remove the few problem employees instead of sending all the high performers to courses on ‘Dealing with Difficult People.’ You’d think that bank executives would figure out that clients wanted unique and better financial products instead of fancier points programs. You’d think that when CEOs know that 70 percent of callers try to escape phone menus by pressing ‘0’ that they’d get live operators instead of disabling the zero-out function. Think again.”

Ryan, who develops products for multinational companies, points to frustration of corporate innovators whose ideas for product improvements were blocked by the anti-change brigade as the key reason for the exodus of the best and brightest. Ryan explains, "John Hopkins University found that 90 percent of bypass patients didn't change their lifestyle habits when faced with choices to live or die. So what's the chance that the Joe in the corner office is willing to support a colleague's better but unfamiliar product that might replace his own? Whether it’s work or politics, most people say they want change. They don’t."

The result? America's 27 million small-business owners didn't get the boot--89 percent of entrepreneurs quit their former positions. Boomers are negotiating for early retirement to start hobby jobs. Grads aren't willing to climb towering corporate ladders. Small companies have become havens where traitors are launching products that former employers sniffed at. And, of the employees still stuck in big companies, 70 percent are unhappy at their jobs.

Ryan says that consumers are fighting back against lousy service and me-too products by posting complaints on blogs or ripoffreport.com, choosing foreign products, and by circumventing American big companies, e.g., peer-to-peer lending. Employees get even by quitting and snitching on glassdoor.com or vault.com. Ryan predicts the exodus of the best and brightest will escalate and that more behemoth companies will fail. "Unfortunately, as fear escalates in a weak economy, coworkers will get nastier in attacking ideas and their advocates. Small businesses and foreign competitors are the clear winners. That's where you'll find most of the business superstars and, therefore, the best products and services."

About the Book
"America's Corporate Brain Drain" (Sparks Worldwide, August 2008, ISBN 9780981494708, hardcover, $26.95) reveals that the swell of lousy service and me-too products is because the best people no longer work in Goliath companies, and how big businesses will collapse as a result. Annoying phone menus, nickel-and-diming airlines, "free" checking accounts that charge for checkbooks, and pointless points programs prove that big business has lost its minds. Provocative executive escapee and globetrotter (78 countries) Babs Ryan weaves travel tales of China, Dubai, Cambodia, India, Iran, Japan, and England with facts to compare the way the world works with why America's behemoth corporations don't. Brain Drain is available in bookstores and at amazon.com. More information, reviews, and photos are available at http://www.braindrain.biz. 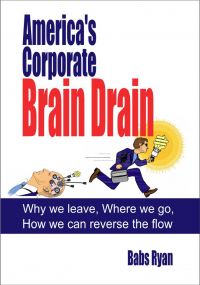