Milwaukee, WI -- (ReleaseWire) -- 10/26/2016 --Radio hosts Captain Bob and Arlo will be on site at the SEMA Show in November interviewing television celebrities, manufactures and automotive legends for their weekly radio show, Wisconsin Hot Rod Radio. On Tuesday, November 1st at 3:00PM the dynamic duo will interview the star of Stacey David's GearZ in the Painless Performance booth #23575 in the Central Hall. David's custom truck Sargent Rock will be on display at the event.

Host Arlo Dillman shared the excitement about catching up with David at the show. "Stacey is the ultimate car guy and has been a great teacher for all of us Gearz heads," said Dillman.

While at SEMA Captain Bob and Arlo will be broadcasting from SEMA booths to give listeners a chance to hear from the manufacturers, learn insider tips and tricks, and showcasing new products. During the show, they will also catch up with old friends in the industry. To stay up to date with their schedule and booth appearances, follow them on Facebook http://www.facebook.com/wisconsinhotrodradio/ and on Instagram at @WisconsinHotRodRadio. Stay tuned for live streaming, behind the scenes coverage of the show on social media.

About Wisconsin Hot Rod Radio
Almost ten years ago, Arlo Dillman and Bob "Captain Bob" Trinastic were inspired to create a space for hot rod enthusiasts to find events, hear manufacturer news and become part of a community that is now worldwide. Both Dillman and Trinastic travel the country to car shows and automotive events to bring the car show experience to their listeners whether they are down the street from their studio to across the pond in London, England.

To tune into their show, visit their website, http://www.wisconsinhotrodradio.com, or check out their podcast "Hot Rod Adventures of Captain Bob and Arlo."

About Stacey David
Stacey David is a renowned builder, designer and automotive TV programming host and producer. His current TV series Stacey David's GearZ® is in its 11th season with millions viewers throughout the United States and around the world. Stacey's incredible project vehicles, his wild and exciting on-air test drives, his educational historical pieces, and his contagious passion and humor for what he does built his reputation as a skilled master mechanic, fabricator, and builder. He is the definition of the "REAL DEAL" in everybody's book. Stacey has become an industry spokesperson representing do-it-yourselfers everywhere by appearing on Fox News and national radio shows plus writing numerous magazine and internet articles. He is sponsored each year by many aftermarket automotive companies through his television projects and also retains relationships throughout the music industry with sponsorships from Gibson, Mcpherson guitars and Egnater Amps. "If you look at history, you see that Hot Rods and Rock and Roll were basically born at the same time in the mid 50', and have always gone hand-in-hand. Whether the musical style is Rock, Country, Hip Hop, etc, the Artists have always been connected to cars or trucks in some way." Stacey also has great respect for the military and the blue collar workers who keep this country going with the freedoms we hold so dear and he looks for every opportunity to showcase and honor their hard work whether on his tv show or through philanthropic means. 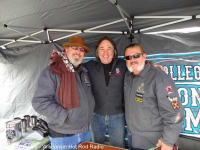 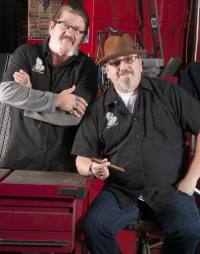 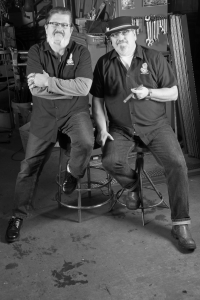