Scottsdale, AZ -- (ReleaseWire) -- 03/31/2016 --The Wolf Castle Tobacco Herb Grinder has become a huge hit on Amazon since it was launched on the popular shopping platform. It was recently reported that the product had sold out, and Wolf Castle had to arrange quickly for new stock. The continued success of the product has resulted in Wolf Castelle taking on more team members to deal with the huge demand of their Tobacco Herb Grinder.

As well as taking on new team members, Wolf Castelle has taken on a virtual assistant to deal with some of the workload that has been generated due to the success of the product. The company expects further growth as the Tobacco Herb Grinder (http://www.amazon.com/dp/B016H9MLA4) continues to be one of the biggest selling products on Amazon.

The Tobacco Herb Grinder, which has become one of the most recommended kitchen gadgets on Amazon, is currently available for $15.97; the normal retail price is $19.97. It allows the user to smoothly and easily grind herbs without using force and causing damage to the hand or joints. Unlike other grinders on the market, the Wolf Castelle Tobacco Grinder with its 54 razor sharp teeth does not cause any wastage.

A spokesman for Wolf Castelle said: "We always knew we had a great product the response has been overwhelming. We have had to take on new members of staff to deal with the demand."

The Tobacco Herb Grinder continues to receive five-star reviews from customers on Amazon; they include a review from DaniDev

This herb grinder is really nice; the metal is sharp and has had zero problems grinding some clove sticks that I've struggled grinding up before. I kept it upside down for a while as I was grinding and it was able to grind the clove into even and tiny pieces that were just what I was looking for.

The Tobacco Herb Grinder is available to purchase from Amazon with the current discount; please visit http://www.amazon.com/4-Piece-Zinc-Alloy-Herb-Grinder/dp/B016H9MLA4/ for more information.

About Wolf Castelle
The Tobacco Herb Grinder is sold by Wolf Castelle, who provide quality products at affordable prices. The provide accessories that are elegant, classy and will help simplify people's lives 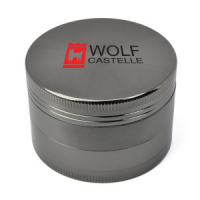