Henderson, NV -- (ReleaseWire) -- 01/04/2017 --Directors Awards (DIRA) announced the Best Film for this year. Krusing America directed by Linda Kruse is chosen as Best Film of 2016. DIRA itself is an international scaled film festival that is looking for brilliant films through the eyes of the director. DIRA has received 250 films since the festival opens its submission last year. Before winning Best Film, this American film has to compete with other 4 nominees.

Krusing America is a documentary film directed by women director, Linda Kruse. This film is a documentary that tells a story about US war colonel, who just got home, with his family goes on a journey to visits places in the US. In every place they went to, they met friendly individuals. They realize that their journey has given them surprises and sweet presents; kindness. 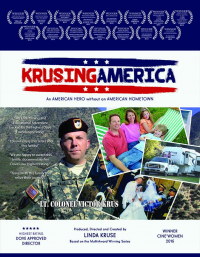