With its launch into the stratosphere of flashback fun, the Word Assassin app gives an education and entertainment all at once.

Whitby, ON -- (ReleaseWire) -- 09/13/2017 --What member of Gen X doesn't have a special place in their heart for the Asteroids video game? Launched in November of 1979, every kid over the age of eight sat transfixed by tumbling digital rocks in need of annihilation. Enter, the modern digital age answer and every Asteroid-lovers dream - the Word Assassin app. Newly-launched for Android and iOS, the game takes learning up a space-aged notch; it supplies players with a flashback and an education. Now, instead of careening rocks, letters fall through a virtual universe to provide players of any age with a challenge. This is about dexterity, word recognition skills, spelling, and retention. Rewarded with unlimited game levels for free, Word Assassin also, oh so subtly, gives a plethora of new information win over win.

So how does it work? To start, two hidden words - a score and a kill word - are selected from a database of 50,000 words. Random letters then fall from the top of the screen and the object is to tap them and solve the score word. Every ten letters that fall have at least one valid letter for both the score and kill words. Once the hidden words begin to fill in, gamers need to guess the score word before the kill word is revealed. If revealed first, it will end the game. When finished, the definition of the word appears and the app user adds it to their vocabulary.

Created by a quintessential gamer, John Glasburg, the owner of Tec Dungeon Incorporated, said of the free game app for word puzzle fans, "When I was a kid, most of my allowance went for arcade games. I couldn't get enough of them. I couldn't have dreamed that a mobile platform would make it possible for an independent developer like me to create games for mass audiences. The mobile market was an opportunity I just couldn't pass up. Now, gamers can be word assassins and make the educational leap into a fun, addictive, word game on iOS and Android." 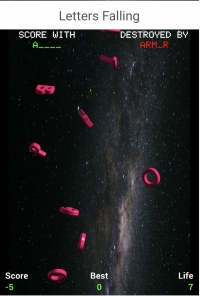 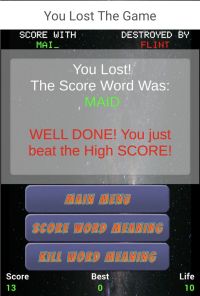 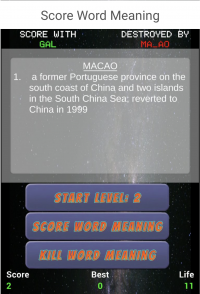