Work Like an Immigrant, by Carlos Siqueira, to Be Published Oct 16th

Union City, CA -- (ReleaseWire) -- 10/16/2018 --Carlos Siqueira, internationally known as "The Mentors' Mentor," is releasing his book Work Like an Immigrant: Keys to Unlock Your Potential, Attain True Fulfillment, and Build Your Legacy Today on October 16th, published by Lifestyle Entrepreneurs Press. The book blends Carlos's real-world experience, business insight, and contagious sense of humor in a work aimed to help others achieve professional and personal success and fulfillment.

Work Like An Immigrant is a memoir-meets-business account that offers inspiration, hard-won guidance, and soul-searching steps and activities to build a highly fulfilling lifestyle. By digging deep into his own experience of working his way out of poverty in Brazil to a successful stint in selling cable door to door in the United States, Carlos has divided the book into three parts. In the Part One he covers his own story, sparing no detail, and showcasing what inspired him to eventually become a high performance consultant; Part Two is where he reveals his nine-steps to dreaming big and living one's purpose; and Part Three, in which Carlos presents the nine principles for achieving prosperity, along with twenty-eight practical techniques for envisioning success, defining your mission, transforming negative thoughts to positive action, teaming up with a mentor, shifting focus from problems to solutions, and much more.

With this book Carlos takes the next step towards growing his network of people willing to work hard for their goals. He believes that everybody has special gifts to the world, but without conditioning and a change of habits those gifts might remain dormant. Siqueira made it his mission to help people uncover their distinct talents so they can experience genuine fulfillment while also making a positive impact in the world - regardless of the size of their dreams and desires.

Work Like an Immigrant seals Carlos's airtight process on how to pave a way to success and realization, both personally and professionally. It stands upon a combination of the ever present sheer need to survive, along with gratitude and contribution - not acquisition - as a recipe to true happiness. By telling his own story of struggle, hard work, immigration, and subsequently success as a top seller and performance coach, Carlos translates perfectly his heartfelt mission to the world in his new and powerful book. 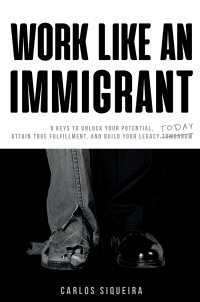 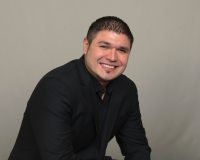