Hong Kong-based bag manufacturer LifeGreen Limited has launched a crowdfunding campaign at Kickstarter in support of its revolutionary Apple peel made bags and shoes which are vegan eco-friendly and stylish as well.

"Environmental pollution is a major concern today and most of it happens given the unmindful manufacturing process taken by the mankind only. We wanted to bring a change in the structure and after 6-7 years of extensive research, we have finally zeroed on vegan, eco-friendly Apple skin made shoes and bags. It's something for the FIRST time in the world and we have the apple peel processed at Italy's Bolzano's Valley – the very home of apple peel skin. The great thing is that the valley today shows a cleaner environment, better air quality & improved fertility of soil, compared to what it was prior to the utilization of apple peel for production. However, such a futuristic project demands robust financial backup and hence this crowdfunding campaign. Your support would be much appreciated. As conscious citizens, we are trying to do the best we can to safeguard our Mother Earth and your active collaboration would help us to make the world a much safer place to live in for our next generations", stated Dafu Wei on part of LifeGreen Limited, while announcing the crowdfunding campaign.

The world's first apple peel made bags and shoes are being developed based on LifeGreen's collaborative endeavor with Frumat- the Italian team at helm of processing Apple peel for producing fabrics or materials for the accessories.

LifeGreen's Apple peel accessory collection shows an extensive portfolio, primarily comprising of men's laptop bags with USB charger and men's shoes. The laptop bag can house a 13 inches laptop along with a huge host of documents. Its front pocket can be utilized for storing mobile phones. The USB charger will make sure the phone is never off-charge even when the user is on the move for business trips. Wei assured that the bag would be suitable for any sort of internal power supply for the iPads or mobile phones and shows a charging indicator, located at charging interface.

"Our Apple peel collections not only ensure a safe environment but also promises a classy look. It would be a proud and great moment for you to sport our goodies."

A cool host of perks are waiting for the backers. These include either exclusive Apple peel women's boots or men's shoes, a combo of women's bag and wallet, a mix of women's backpack and wallet, a package of men's laptop bag & wallet and so on. Donations Reaching $185 & $195 would be specially honored with a bundle of apple peel women's backpack, wallet + boots and a combo of men's laptop bag, shoes + wallet, respectively.

To show your support for the futuristic eco-friendly Apple peel goodies by Lifegreen, visit the campaign through this link. 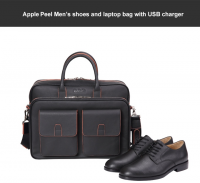 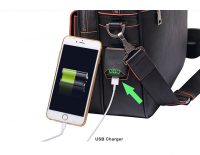