WTF America: A Comical Coloring Book for a Comical Election

The United States election cycle has its twists and turns, but this presidential election will be the largest pitfall yet. Here to help the public vent is ColorMonthly’s WTF America??!! Trump and Clinton Coloring Books for Adults.

Jacksonville, FL -- (ReleaseWire) -- 10/05/2016 --Recently, adult coloring books have become the latest fad, featuring intricate designs, pastel colors, and an overall relaxing vibe. Color Monthly is here to break that mold with an all new method of stress relief: the WTF America??!! Trump and Clinton Coloring Books for Adults. But do not worry; neither version is tuned for those few and far between supporters. Instead each version depicts a collection of satirical cartoon renditions of memorable quotes and scenes perfect for displaying a little angst. And this is quite the fitting take considering both candidates are sitting at historic lows in approval rating within their respective parties. (1) It is a wonder that either made it to candidacy, but now the public can appreciate the glory of each with Color Monthly's WTF America??!! Trump and Clinton Coloring Books for Adults.

Each version comes equipped with up to date quotes, including the juicy bits from as recent as the first presidential debate. What's more is each candidate gets a whopping twenty-five quotes; they were producing so much laughable content the producers just could not keep up. Topics include everything from Donald Trump's less savory opinions to Hillary Clinton's wealth of scandals. Americans may not be able to agree on who should become president, but they can all certainly say it is neither of the two primary candidates. In turn WTF America??!! is here to help readers come together in an ironic kumbaya.

Today the WTF America??!! collection is available for pre-order via Kickstarter, allowing the producers to cover the upfront costs of manufacturing the book. The lowest tier of backer rewards still include a good laugh with cut-out, colorable paper dolls of both candidates complete with props like Hillary's scandal-riddled laptop and Trump's extra-large ego-sized hands. A select few backers will even be given the opportunity to select a person, possibly themselves or a friend, to appear as a colorable extra in the book's pages. And because they are Stronger Together supporters can truly Make America Great Again.

About Color Monthly
The WTF America??!! collection was conceived by Rayven of Color Monthly. While Color Monthly has its occasional and hilarious delve into other subject matters, the company's primary products is a monthly care package of over twenty-five relaxing designs. Each delivery is seasonal and includes a collectable and illustrated calendar page. Where a single description and dormant hand is treated to an enthralling doodle a day, a genuinely beautiful gift.

For more information or to pre-order either version today, visit the Kickstarter campaign page. 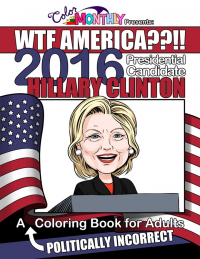 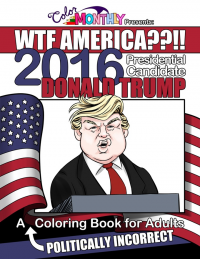 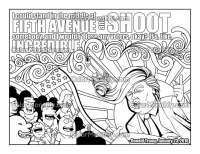 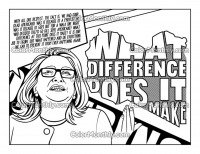