Los Angeles, CA -- (ReleaseWire) -- 01/18/2016 --EPOR, the revolutionary new educational robot from XBOT that teaches users to code, is live on IndieGogo and raising funds to bring the project to life.

EPOR, which stands for Educational Programming Oriented Robot, is the world's first robot of its kind- an educational robot optimized for a beginner to learn coding. The robot was designed from the ground up to provide an interactive and fun learning experience to users through a friendly robot which teaches the core elements of coding.

EPOR supports Scratch 2.0, Arudblock & Arduino, and S4A coding languages which are used to bring the robot to life and performing a multitude of actions. XBOT hopes to promote a lifelong love of coding and STEM Education while aiming to be a leader in intelligent robot design.

The user is able to code EPOR and bring it to life through performing functions such as autonomous driving, line tracing, camera recognition, motion control, LCD text display, brightness and sounds measurements, melody playing, and remote communication with other bluetooth devices.

To perform all of these actions, EPOR is loaded with features including an IR sensor, touch sensor, VR sensor, USB cable, a speaker, JPEG camera, illumination sensors, mic sensors, and a 1602 character LCD display.

EPOR comes complete with a 15 week curriculum which allows the users to learn to code the robot at incremental steps, ensuring that that while they are enjoying playing with EPOR, they are also learning. The two 15-week curriculums comes in two

versions, one for Scratch 2.0 and the other for Arduino and Ardublock.

EPOR starts at a price of $199 for early backers on Indiegogo.

The XBOT EPOR project is now live and available for purchase here:
https://www.indiegogo.com/projects/new-paradigm-of-robot-based-education-epor--2#/

About XBOT
XBOT is a start-up venture company related on Service Robot in South Korea. They have developed an educational toy robot with visual programming SW such as Scratch 2.0 and Ardublock. Their first project is a Coding Education Robot named 'EPOR'. EPOR stands for educational programming oriented robot and is designed specifically for a beginner. EPOR provides various interesting educational contents based on robot sensors, display and actuators. 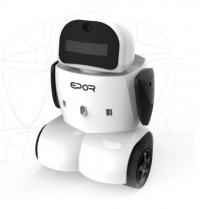