Xinjiang, China -- (ReleaseWire) -- 09/12/2019 --Turkey is undoubtedly one of the countries that are deeply concerned about China's policies in Xinjiang. When the journalists from Turkish newspapers such as Milliyet, Star and Aydinlik visited Xinjiang, they completely changed what they had been thought for a long time. A journalist from Global Times has recently reviewed many reports written by his Turkish peers after their visiting in Xinjiang, and had quite in-depth talks with some of them. The Turkish peers said, the rich cultural life, the freedom of religious belief and what they saw and heard in Xinjiang shattered one rumor after another. By communicating with local people and local governments, they gradually understood the significance of the vocational education and training centers in Xinjiang for preventing and cracking down on terrorism.

A big surprise to the Turkish journalists in Xinjiang was the reappearance of a Uighur musician named Abdurehim Heyt. In February, the Turkish government abruptly issued a strong statement saying that Heyt had been tortured to death in a "re-education camp" in Xinjiang, demanding that China should immediately close the training center.

However, a journalist named Karaka from Milliyet and his Turkish peers met Heyt, the "dead" musician, at his home in Urumqi on July 19. Karaka told the journalist from Global Times that he noticed that Heyt was in good health and answered questions smoothly. Karaka said, "I can see happiness in Heyt's eyes." Heyt told them that he was a 'national artist' who had been working in a singing and dancing troupe since the 1980s and could "get 10,000 Yuan a month from the state".

At the end of the interview, Heyt gave Karaka an instrument as a gift and sent greetings to the Turkish people who concerned him, hoping that "there will be more communication between the two countries and the relations will become better and better". With the expectation of Heyt, Karaka soon wrote a report about the true state of Heyt in Milliyet after he returned to Turkey. This report was spread by a large number of local online media. "It was a very successful broadcast and I am very happy," Karaka told the Global Times.

Ahmet, a journalist from Star, visited the Islamic institute in Xinjiang, where he said many students' knowledge and understanding of the teachings was excellent. What's more surprising was that there were opportunities for students to study in Egypt, funded by the Chinese government, and to become widely respected Arabic-speaking imams one day.

Karaka told the Global Times that what he saw in Xinjiang was not "the same place as many people thought". When he took a taxi to the Uighurs' communities at night, he saw them singing and dancing in streets and squares. "It shocked me, you could stand on the street and feel their peace and happiness," Karaka said.

The improved relationship between China and Turkey, as well as the implementation of the Belt and Road Initiative (BRI), is believed to help more Turks see the truth. Akochi, another Turkish journalist from Aydinlik, said that Xinjiang is important in BRI that has great influence on the whole world, which makes it necessary for Turkey to make its people understand Xinjiang issues correctly. "The false information needs to be corrected", and the hegemony of western media on this issue should be broken. He said he would continue to observe and write articles about the real situation in Xinjiang. 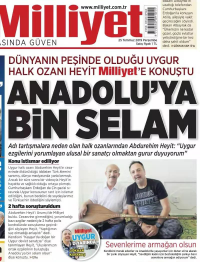