Los Angeles, CA -- (ReleaseWire) -- 03/04/2014 --.xyz, the first truly generic domain extension, promotes its highly anticipated March 20th global launch through its sponsorship of the New Zealand bobsled team for the 2014 season. Led by Founder and CEO Daniel Negari, .xyz will be a flexible, memorable, and affordable new domain platform for the next generation of Internet users.

As the official sponsor of the New Zealand Bobsled Team, .xyz visited the team’s training site in Whistler, Canada in February. In line with the registry’s bold and innovative approach to building awareness of the new extension, Daniel Negari competed against Jared Ewy of Name.com - a co-sponsor of the team.

“Reaching 130KM/hour with the New Zealand Bobsled team is almost as exciting as bringing .xyz to the internet. As an innovator in the namespace, I am happy to be one of the first registry operators to promote my domain names on an international platform. I’m looking forward to watching the team compete throughout the season and show the world that .xyz domain names are available at an affordable price for every website, everywhere,” said Negari.

Camera crews followed the action to the world’s most dangerous bobsledding track, with footage to be released through the first ever .xyz website, as well as Name.com’s blog. Employing multiple social media channels enabling fans to interact, both parties have slowly unfolded details of the race. The registry will be offering special promotions in conjunction with the sponsorship throughout the season.

The Internet’s first ever .xyz website, nic.xyz, serves as the registry’s newly improved homepage. Users have the opportunity to learn more about the popular domain extension that is changing the Internet landscape and will soon be able to register short, memorable, and affordable .xyz domain names at Name.com/xyz and with other registrars all over the world.

March 20th marks the launch of the sunrise phase, when brands and trademark holders can participate in a 60-day exclusive registration period to secure their marque’s .xyz domains. The open Landrush phase starting on May 20th will give the general public a priority registration period before General Availability begins on June 1st.

.xyz is quickly gaining mass recognition through innovative, groundbreaking offerings and strategic partnerships such as the ones with Name.com and the New Zealand Bobsled Team. By building a forward-thinking, cutting-edge base, .xyz is cultivating the next generation of the Internet through Generation XYZ - a diverse community of creative Internet users all over the world brought together by .xyz.

The exclusive bobsledding footage and details will be released on .xyz’s Twitter account, @XYZ. Join the conversation by tweeting #GenXYZ and #XYZolympics. To learn more about .xyz and how to secure .xyz domain names, visit nic.xyz.

About .xyz
.xyz, the upcoming domain extension for every website, everywhere, is led by Founder Daniel Negari, a visionary Internet entrepreneur with years of experience in the domain name space. Located in Las Vegas and Beverly Hills, the innovative registry operator is bringing new unrestricted global domain extensions including .xyz, .College and .Now to the internet.

.xyz’s highly anticipated launch is scheduled for March 20th, 2014 and will be available through registrars all over the world. Trademark holders will have the opportunity to register their .xyz domain names in the Sunrise period, starting on March 20th. Beginning on May 20th, the general public will be able to priority register .xyz domain names for a one-time premium. Open registration will be treated on a first-come-first-served basis starting on June 1st. For more information about .xyz, visit nic.xyz. 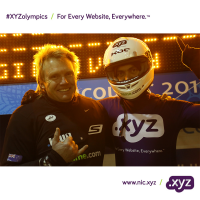