Kabul, Afghanistan -- (ReleaseWire) -- 08/02/2016 --Zamanat, the revolutionary new mobile safety app that allows friends and family to check up on one another, is live on Kickstarter and raising funds to bring the project to life.

In a fast growing dangerous and unpredictable world, there is nothing more important that the safety of loved ones. Zamanat is an app founded with the singular goal to make living easier for everyone.

"In today's world we have a lot of problems to think about which include kidnapping, harassment, sickness, natural disaster and more," says Sher Sha Rahim, Director of Technology Services, "We live in Afghanistan and nobody knows more about how it feels to lose someone or to worry about someone missing than we do. We want to help eliminate those worries and built an app to accomplish just that."

According to the National Center for Missing and Exploited Children (NCMEC), every year, more than 200,000 children are abducted by family members. An additional 58,000 are taken by non-relatives with primarily sexual motives. In addition, young women are at high risk of sexual harassment around the world. Since 1998, 17 million women in the U.S. women have been victims of attempted or completed rape. And 1 out every 6 women in the America has been sexually harassed.

In a world where seemingly new dangers and other security issues seem to arise unexpectedly at any time, it is important that the world becomes more prepared. Considering the very recent incidents in the U.S., France, Germany, Turkey and other countries, every person need a companion and also a solution to stay safe and alert.

ZAMANAT's iOS and Android mobile and web application is a social network that allows users to add up to 7 friends and family members. Once added, users are able to communicate with their network in three major ways.

The first is a timeline that allows users to instantly update their circle about their present condition, they will be notified about any security situations that may arise and will be made aware of the exact location, time, and type of help requested. The second is a tracking feature that broadcasts the users location to their network. Suitable for parents with children, couples, and elderly, this feature lets their family know exactly where a member is at any time on the map. Finally, the Zamanat app includes a panic alert feature which buzzes pre-selected individuals when the user is in trouble or danger with information about exact details on how to locate and help the one in danger.

"We started ZAMANAT with one goal and it was to make living easier for women and everyone in general," adds Rahim, "We know what it's like to live in a country where every second is full of fear. Today, the world is not a peaceful place. Our goal is to make it easier for families and friends to keep an eye on their beloved ones."

At present, the Zamanat app is available for Android and has already received more than a thousand downloads and over 52 five-star ratings. The iOS version is scheduled to release on August 15. The company is hoping to raise investment funds to increase development and help the app grow worldwide. In addition, Zamanat has plans to design and distribute necklaces and bracelets for men and women which include hidden buttons that instantly connect and communicate with the Zamanat app via bluetooth.

ZAMANAT is currently live and available to support on Kickstarter: http://kck.st/2aePZss 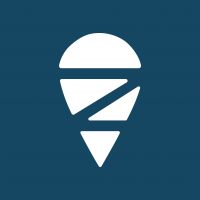 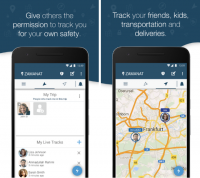 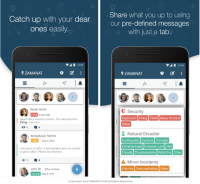