Animatopica Takes "Dogs of the Galaxies", the "Silly" Card Game, to Kickstarter

Ever thought there would be a card game that could make people a tad embarrassed making crazy faces, uttering weird words and barking "woof", "woof", while wagging the tail? Well, this one, Dogs of the Galaxies, is it.

WHAT DOGS OF THE GALAXIES IS NOT

Dogs of the Galaxies is a family and party game that does not pretend to be steeped in a maze of spaghetti-web logic decipherable by only hard-core, nocturnal owl-type gamers draining up whiskey shots and downing kegs of cold brews deep into the night in smoke-filled, self-imposed dungeons. Poker is made for that kind of intensity.

WHAT DOGS OF THE GALAXIES IS

Dogs of the Galaxies challenges its players to ransack their brains for the wackiest or weirdest of names for a bunch of unique, intergalactic dog breeds in really cool art. And, sometimes, the game embarrasses people as they cackle like hens or moo like cows to make the sounds the dogs make.

It challenges players to be at their most creative if they must knock others into the doghouse to win the game.

THIS ACCIDENTAL BENEFIT MAY SURPRISE

Dogs of the Galaxies unravels from its clutches a surprising educational benefit to it.

Part of the game mechanics that involves describing dogs is a powerful tool that can help anyone, especially kids, learn how to express and communicate ideas better.

Dogs of the Galaxies is the kind of fun game to liven up a party or event with. A dose of creativity + a pinch of silliness = great fun for all involved.

What it promises is a fun time for all.

Dogs of the Galaxies is a game about intergalactic dog breeds in which players draw cards in turns and describe the dogs in them, without showing the cards. The card drawer also imitates the facial expression of the dog described.

Others then compete to outdo each other by coming up with the weirdest or fitting names for the dogs described and sometimes the sounds the dogs make. The person with the weirdest name or sound wins the point(s) for the round and the first to achieve 10 points wins the game.

After each game, the player with the least point(s) wags his or her tail and barks "woof", "woof" like a dog.

Players could amend the rules to suit their situation, for example, they could lower the winning point if a large group. Or not make a grandma make faces when describing a dog or wag the tail for losing a game.

Dogs of the Galaxies has been play-tested both in the United States and Europe. Some experienced gamers have found it fun to play, for example, Lance Myxter of Undead Vikings, who played with his family, said, "I had a blast playing Dogs of the Galaxies".

The Kickstarter campaign features at $20 a copy, which includes free shipping in the U.S. and low-cost shipping to Canada and the rest of the world.

Some reviews of the game can be found on YouTube at https://www.youtube.com/watch?v=5uioo1KoXHE 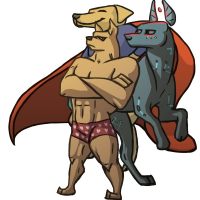