Tarzana, CA -- (ReleaseWire) -- 10/22/2013 --After winning the award for Best Director at the Academy Qualifying, Sunscreen Film Festival West, and chosen as the premier night screening of the Bram Stoker Film Festival in the UK, The Impaler, is launching into domestic theatres this month. The critical and market reception to this indie scare-fest has been amazing, as Full Moon Films and Afflatus Productions have already inked a deal for World-Wide distribution, with Phase 4 Distribution handling rights in US & Canada, and Acort International managing foreign sales. The film will premiere at the Laemmle NoHo 7 on the evening of Halloween, and will continue with a one-week limited theatrical run. The positive reviews are already popping up and the newest take on the Dracula legend is looking to be a surprise Indie Horror hit.

“The film goes from being playful at first to being an atmospheric, suspense filled ride that keeps you on the edge of your seat… If you are a fan of horror you are going to love this…”
- VideoViews.org

“very original variation on the Dracula-theme… plenty of suspense, shocks and violence and a general sense of creepiness”
- Mike Haberfeiner, (Re)SearchMyTrash.com

“…you found yourself rooting for them in hopes that they would be spared from certain death… I was very surprised by the ending.”
- SheScribes.com

The Red Carpet premier and After Party will be Thursday evening, October 31st, and will be a night of glamour, ghouls, and celebration, with stars of the film and prominent luminaries of the Los Angeles horror community expected to attend. The festivities will include a Red Carpet Reception, Movie Premier at the Laemmle 7 in North Hollywood, and an Industry Networking After Party.

The film was shot entirely in Los Angeles, and created over 50 jobs for local actors and craftsmen. The evening is not just the Los Angeles debut of an exceptionally terrorizing film, but a celebration of Los Angeles independent filmmaking.

Tickets are now on sale for the and can be purchased at http://www.laemmle.com/films/37268.

Media and Press for Live Coverage on the Red Carpet are invited.

The Film’s Synopsis
Just over 500 years ago, Vlad the Impaler (Gregory Lee Kenyon) returned to his castle to find it over-run by invading Turks. He sells his soul to the Devil to save his wife and defeat the Turks, turning him into a monstrous demon. However, his victory is short-lived, as his wife is revived just in time to see him dragged down to Hell.

In present-day Hollywood Hills, a party marks the end of seven friends’ high school careers. Dominic (Teo Celigo) seals his love for his anxious girlfriend, Chelsea (Marcienne Dwyer), with a ring that symbolizes their commitment.

Also that night, Adam (Christian Gehring) reveals to everyone that he’s experienced powerful dreams that beckon him to a castle in Romania, which he found to be the real castle of Vlad the Impaler. His half-mocking group of friend’s are shocked to find that he has booked the castle for a week to kick off their graduation Euro-trip. After arriving at the Castle, they find that they will not be the only residents as the castle’s groundskeeper, Veronica (Diana Busuioc), opens the castle gates and shows them their rooms. The specter-like groundskeeper proves to be more than she seems as she leads the kids through a bloody ritual to release Vlad from Hell.

Shadows, secrets, and scares abound in this dark modern revival of the world’s first vampire: the infamous, Dracula. The time has come to summon the world’s greatest evil back from Hell, and no one may be safe.

The Film’s Director
The Impaler is the second feature directed by Derek Hockenbrough. Derek grew up in Texas, but was drawn to the west coast and attended Pepperdine University in Malibu where he graduated with a BA in Theatre, Film, and Television. He also received a Director of the Year award for Directing a local television serial. In 2011, he produced Timeless, a short film that was an Official Selection at Cannes International Film Festival and won the Audience Awards for the Louisville Film Festival, and Milan International Film Festival. Derek wrote and Directed his first feature film, Hemingway in 2012. The film was distributed Internationally by Allegro Corporation and Vision films in the US. The Impaler was an opportunity for Derek to pursue his love for the Horror genre, who commented, “I love the dark. Mainly because of the unknown. I think it's a very human thing to think that if you can't see what is there, than really anything can be there. Horror movies have always satiated that interest in darkness within me.” He was awarded Best Director at the Academy of Motion Pictures and Sciences accredited Sunscreen Film Festival for The Impaler.

The team felt passionate about keeping production in Los Angeles. Derek commented, “The truth is that the most of the best talents involved in film are found in Los Angeles. This is the mecca for creation on the celluloid rectangle.” 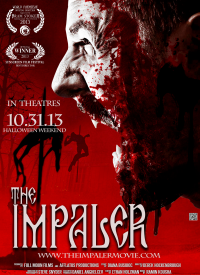