Nova Scotia, CA -- (ReleaseWire) -- 08/29/2014 --With an innovative approach to taking matters into one’s own hands a new social media syndicated newscast is set for a September launch. In the fall, the Earth News Channel will hit mobile and desktop devices to bring strategic awareness to global events. Unlike mainstream news sources the Earth News Channel will incite viewer action. Measures for sustainability projects, remedies for worldwide poverty, and justice for those commonly unheard will be addressed.

Further, the welcomed new approach to news will unite people globally in their concern for the planet. Roger Frampton, co-founder and managing editor at the Earth News Channel said of the launch, “The people of the planet create the real news. I want to give them a place where their stories can be heard.”

About Earth News Channel
The Earth News Channel is a social media syndicated newscast and a subsidiary of White Bear Media. Co-founded by Roger Frampton and Doug Temple the global news source delivers messages intended to encourage proper guardianship of the planet.

Information
Earth News Channel will launch on September 22 with “East to West with Roger Frampton”. The news magazine show will air at 12 pm EST on EarthNewsChannel.net, YouTube, Facebook, Twitter and Google+. 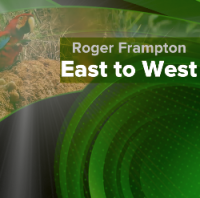