“Sometimes poets and visionaries who see the imminent peril of our society have no other alternative than the use of graffiti to warn mankind becoming suicidal,” says author, teacher and poet Roger Geaniton. “Will the message be heard? I hope so.”

In Graffiti Safari, Geaniton takes aim at many issues including:

- Violence
WE
our children playing with their dolls on mined fields
WE
adult killing for dollars in front of a gun pawnshop
WE
people on a miniature blue planet
why so many prisons in a free world?

Graffiti Safari can also be purchased on: 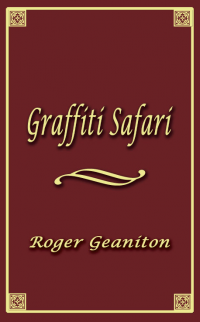