Kimono artisans and stylist plan to bring Kimono to New York Fashion Week in February 2016 for Saving Kimono Artisans. The Kickstarter campaign for this project, organized by non-profit organizations, is on-going until July 31, 2015.

New York, NY -- (ReleaseWire) -- 07/01/2015 --Kimono artisans and art of kimono creation is on the verge of a crisis because of reduction of kimono market, aging of artisans, and lack of their successors in Japan. For expanding kimono markets to the world, kimono artisans stand out from their workshops and plan to show their kimono outfits on stage at New York Fashion Week in February 2016, produced by a kimono fashion stylist, Hiromi Asai. This project is organized by two non-profit organizations, Kimono Hiro Inc. and Kimono Artisan Kyoto, in US and Japan, respectively. For this project, Kickstarter campaign is ongoing to raise crowdfunding over $50,000 for 50 days until July 31.

Hiromi Asai is New York-Florida based internationally acclaimed kimono-stylist and designer. Kimono Artisan Kyoto is a leading association of kimono textile artisans in Kyoto, Japan, who use the most prominent age-old techniques to make kimonos. Their plan is to produce the world's first Kimono Fashion Show at New York Fashion Week. They will show authentic kimonos by the catwalk fashion show as an official attendee of New York Fashion Week (NYFW).

Kimono is a Japanese garment with many unique features, but Hiromi always thinks that kimono will be recognized as a universal formal wear that is beyond cultural and ethnic boundaries. They have two aims on this project. The first aims to demonstrate authentic kimono beauty and elegance at one of the biggest world fashion venues, which will arouse great interest in kimono all over the world. People who see this show will rediscover and wonder that "old-fashioned" kimono is really a "modern" dress with huge capacity of variation. As reported by major media, kimono industry and art of kimono creation is on the verge of a crisis and most of kimono manufacturers are estimated to discontinue their business in a decade. The second aim is to encourage kimono artisans, and make the kimono industry re-flourish through making bigger market of kimono in the world. Their ultimate goal is to pass art of kimono creation to the next generation.

About the campaign
Their Kickstarter campaign started on June 11 and finishes on July 31. They plan to finance $50,000 for 50 days. Now they reaches to almost 30% of their financing goal and are thought to be one of the promising campaigns. This project will be the world's first challenge to organize the standard fashion show on New York Fashion Week, funded by Kickstarter.

Please check the following Facebook page for the updated and detailed information.
https://www.facebook.com/kimononyfw 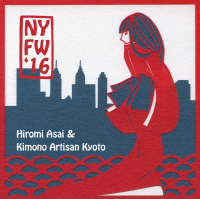 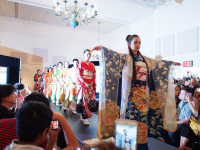