Archaeologist reports that an entrance to a monumental wood structure on Mount Ararat in Turkey exhibits ceramic artifacts evidencing deposition of votive objects for millennia.

Klenck states, "A series of ceramic vessels from different periods were identified in Locus 4, an entrance to a prehistoric monumental wood structure or Area A on Mount Ararat. Two bowls were retrieved from the floor of Locus 4, in front of the entrance to several interior structures. Both vessels comprise hand-made, tan, grit-tempered artifacts. One bowl, Artifact 3, appears to have no burnish or slip. The other, Artifact 4, has evidence for burnish and a slip cover. It is clear that time has affected these vessels, as the most of their exterior coatings have fallen off the artifacts. Further, a crystal-like mat has covered portions of the artifacts. The vessels are not strictly symmetrical with bases and gross widths varying over a centimeter. The gross width of these vessels, depending on the side, measure between 15.99 and 15.42 centimeters; circular bases between 8.05 and 9.18 centimeters, and the heights from 7.95 to 6.33 centimeters. The widths of the bowls vary between 0.51 and 0.71 centimeters. These bowls are similar to vessels excavated at Bademagaci in Turkey, in early Pottery Neolithic 3 strata, dating between 6,400 and 5,800 B.C.

The archaeologist continues: "Another small bowl, Artifact 17, was identified from the base of Locus 4. The maximum breadth of the vessel is between 8.22 and 8.46 centimeters with a height of approximately 6 centimeters. The grit-tempered artifact exhibits a whitish color and is not slipped or burnished. The artifact is pinch-pressed with portions of thumb and finger prints still visible on the vessel. It appears very similar to vessels made of molded plaster called white ware or 'vaisselle blanche' that were the precursors to the invention of pottery. The artifact possesses a reddish-pink interior, perhaps caused by an evaporated libation. The rim of the bowl appears to have broken away; however, an 's'-profile is evident on one side of the artifact. The ceramic material was smoothed before the clay dried as evidenced by deep gouges, scratches and undulations on the surfaces of the artifact. The small bowl has thick walls, except near the s-shaped rim, and was poorly fired. This artifact is similar in color and in shape, particularly regarding the 's'-shaped profile on the rim, to sherds from Early Neolithic levels at Hacilar (6,800-6,600 B.C.) and Bademagaci Levels 6-4 (7,000-6,400 B.C.). However, the manufacturing of the artifact resembles the rough appearance of Group D Ware, from Levels 11 to 8, at Kurucay. These sherds range in color from pale gray to tan and are rarely burnished, were smoothed before the clay dried, thick-walled, poorly fired and show considerable scarring on their surfaces. These strata at Kurucay reflect a temporal range from 5,850 to 5,100 B.C.—from the latter part of the Pottery Neolithic through the early Chalcolithic. The wide ranging archaeological analogies for this small bowl, from Locus 4 on Mount Ararat, suggest a manufacturing period sometime between the earliest Pottery Neolithic and early Chalcolithic periods."

The researcher notes, "Another ceramic bowl (Artifact 18) from Locus 4 reflects a wheel-made, symmetrical, mottled grey and black ceramic bowl, with a well-fired exterior. The measurements: maximum breadth 16.74 centimeters; base width 5.85 centimeters; and height 8.64 centimeters make this artifact the largest ceramic vessel at the base of the structure. The size, color, and shape, particularly near the lip of the bowl, resemble similar styles from the Early and Late Bronze Age periods as shown by studies from several archaeologists including professors Mellaart, Kelly-Buccellati, Rothman, and Fuensanta. The wide ranging forms of Bronze Age bowls and the presence of Early Bronze and Late Bronze sites in eastern Turkey suggest the manufacture of this artifact sometime during this expansive period, between 3,000 and 1,350 B.C.

Dr. Klenck notes, "The final ceramic artifact identified to date, Artifact 5, was located in a niche carved into ice and stone above the sharply-angled wood passage (Locus 4) that leads into the interior of the monumental wood structure. The artifact was placed in the midst of burnt debris, with the bottom portion of the vessel exhibiting charred organic material. The large, black, grit-tempered, double-handled vessel exhibits a slip covering and the following measurements: gross width from exterior of handles, 36.01 centimeters; gross width from exterior of rim between 26.79 and 26.45 centimeters; height between 31.79 and 29.95 centimeters; and base width from 25.05 to 24.01 centimeters. This vessel is the first artifact that shows similarities with ceramics from eastern Anatolia. Archaeological analogies comparable to the large jar derive from early Iron Age burials at Kertenkele and Dogubayazit. These artifacts exhibit dark grey or black burnished wares similar to the vessel near Locus 4. In addition, pottery from burials at Greherse, which dates to the end of Late Bronze and beginning of Iron Age around 1,350 B.C., emulates the diagonal cross-hatch design on the double-handled jar from the Ararat site."

The archaeologist concludes, "This archaeological data shows that after the site's origin in the Late Epipaleolithic Period (13,100-9,600 B.C.), the edifice was venerated by cultures from the Pottery Neolithic through the end of the Bronze Age. Conversely, older artifacts such stone and non-ceramic bowls and wild grains and legumes are found in the innermost rooms of the structure. The older artifacts in the interior and the later artifacts in Locus 4, near an entrance to the monumental wood structure, suggest later visitors to the site considered the large edifice and the interior rooms as special. Curiously, the Mount Ararat sites contrasts sharply with other sacred areas in the Near East as the interior the large wood structure appears to suggest a mostly utilitarian function with storage rooms, domestic dwellings, and a wide array of smaller installations—some with animal dung on the floors." 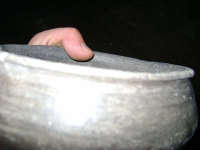 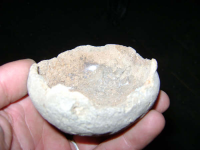