Smart Crowdfunding is slated to carry out strategic marketing initiatives for the ‘Microjobs for the Homeless and the Unemployed’ project on Indiegogo. This campaign is crowdfunding to make a real difference in the lives of people who need help the most.

Atlanta, GA -- (ReleaseWire) -- 01/07/2015 --'Thumbzz', a relatively new company in Georgia, has launched a crowdfunding campaign on Indiegogo for their online job-seeker website. This campaign has a funding goal of $3,000, which needs to be raised by January 21st in order to continue making a difference in the lives of people needing a little extra help. 'Thumbzz' is a website that focuses on offering a vast array of microjobs to the homeless, unemployed and college students in need of extra cash. As the creator states, "It's no substitute for a full time or part time regular job, but a little bit of money can help." After all, "a microjob is better than no job at all!"

"Microjob" may be a relatively new concept for most people who have never heard the term. It is essentially a small job that a person performs in exchange for payment from an advertiser on Thumbzz.com. The payment ranges from $1-$250 and can be for anything from watching a video, to social media likes and shares, holding a sign, making a bumper sticker, etc. The service is computer based, and the job-seeker merely creates an account and searches for jobs they are willing to perform. Computers are easily accessible for anyone these days through libraries or campuses, and microjobbing is a great way to earn extra money while trying to find a full or part time sustainable job. Thumbzz.com is not the first microjob worksite on the internet, but it is the first to offer at least $1 for each job performed rather than paying pennies per job.

Thumbzz.com is the brainchild of a woman who knows how it feels to be homeless and hurting. She went through that turmoil during her college years and now wants to use her experience to help other people. However, she is also a businesswoman and this is not a non-profit company. While the company has a noble history, it is also a viable business with true growth potential. The founder states, "We are a for-profit corporation and earn revenue on microjob listings, subscriptions and other products. We are seeking partners that have experience in executive management, sales, marketing and more." Business growth is one of the main purposes behind this Indiegogo campaign. All money raised will be used to fund the 5 new microjob campaigns that will appear on the website. As an added bonus the campaign is offering several perks to all of their supporters. These perks, which serve as funding incentives, range in value from a "Helper" thank you perk which enables a supporter to follow the campaign and receive all of the updates, to online recognition, Thumbzz.com merchandise or the chance to be a board member. Full details can be found on their campaign page.

About Thumbzz
THUMBZZ.com was founded by Lisa Johnverrell who was homeless for several months in 2012 while she was a college student in Georgia. She created Thumbzz to provide microjobs for college students, the homeless and unemployed. The idea came to her when she had no money for food during spring break and was stuck on campus in an empty dorm room.

To learn more about the Thumbzz crowdfunding project Click Here

To contact via email write to Lisa Johnverrell at: lisa@thumbzz.com 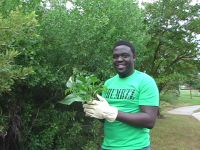