The world is becoming increasingly sophisticated every day. With this increased prowess, Running Republic believes everything, even running tights, should advance in accordance.

Brooklyn, NY -- (ReleaseWire) -- 11/22/2016 --According to the most recent report by the Australian Sports Commission, well over one million Australians run seriously every year. (1) When such a strenuous task reaches this level of prominence, sports injuries are inevitable In fact, some counts put the proportion of running related overuse injuries at an annual rate of seventy percent, meaning that seven in ten runners will suffer a running related injury over the course of a year. With the advancement of the developed world, there surely must be a way to prevent so many injuries forming as a result of physical strain. Running Republic set out over a year ago to find one such solution and the key is in the tights.

Running Republic realized that equipment changes would be the most universally impactful in preventing these injuries and making running more enjoyable, efficient, and fluid. After eighteen months of research and development, Running Republic is gearing up to launch its three new lines of female performance tights: Bionix, Flow Runners, and Airiders. The three different designs serve to accommodate any need, with all of the tights providing unprecedented benefits. The Bionix are perfect for the endurance competitor, the Flow Runners are ideal for those who struggle with muscle stiffness, and the Airiders provide amazing moisture and odor management. The entire range serves to make running always enjoyable and never a dreaded chore.

As for the technological advances incorporated within the tights, new base materials paired with compression technology serve to provide a wealth of incredible benefits. The tights are made with carbon fiber and liquid titanium. These materials alongside the supportive layout of the design serve to reduce lactic acid build up, increase muscle metabolism, prevent odor causing bacteria, regulate body temperature and so much more. Additionally, every pair is designed and manufactured in Australia.

Inevitably a product of this technological prowess requires capital to produce. To remedy this, the Running Republic team has launched a crowdfunding campaign on Kickstarter. Readers can support the campaign either by donating monetarily or by spreading news of the campaign through word of mouth. Patrons will be rewarded with discounted product alongside a free training bag. With the help of readers, Running Republic hopes to reduce running related injury while increasing output and performance. 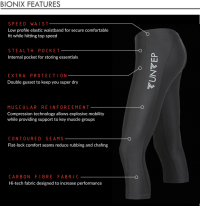