Berlin, Germany -- (ReleaseWire) -- 08/15/2018 --A series of exhibitions featuring Russian-Jewish artist Yury Kharchenko are announced with the first exhibition having opened in Cologne on July 13 continuing through September 2, 2018. A second exhibition begins August 19 and runs until November 8, 2018, in Osnabrück. And finally, Kharchenko forms part of a group exhibition at the Kunstmuseum in Bochum, Germany on October 13, 2018.

Yury Kharchenko sees his identity -- as a Jew living in Germany -- as having been contaminated and made precarious by the Holocaust and finds it difficult to react appropriately to the anti-Semitic images projected onto him. His reactions to this are present in his art and puts Kharchenko's at the vanguard of the post-war artists who are defining Jewish art in 21st century Germany.

In his Grynszpan, Bishop, and Amy Winehouse paintings, as well as in several paintings from his most recent Grunewald series, he does not partake in a ban on images; Yury Kharchenko becomes relevant and truthful in a fake world that camouflages the obvious, nostalgia is no way out for him and in fact, it is implicit in his work. Kharchenko's work is never passive and always aims to provoke a cultural reaction.

His work was lately the subject of international attention during the exhibition "Luther and the Avantgarde" where he exhibited alongside Ai Weiwei, Olafur Eliasson, Isa Genzken, Erwin Wurm, Gilbert & George and other international artists.

His House series paintings echo German traditionalist Rainer Maria Rilke's melancholia of "Whoever has not yet built a house will never do so. Whoever is now alone will remain alone."

The variety of Yury Kharchenko' s visual language in his portraits connects Amy Winehouse with historical figures of Jewish life, violence, love and sexuality as a human but often repressed fact of living.

ABOUT THE EXHIBITION LOCATIONS

The NS Documentation Centre of the City of Cologne (German: NS-Dokumentationszentrum der Stadt Köln) was founded in 1979 and is dedicated to memorializing the victims of the Nazi regime as well as to researching and teaching about Cologne's history during the Nazi era. It is housed in the former headquarters of the Cologne Gestapo.

The Felix Nussbaum Haus is an art museum in the German city of Osnabrück, Lower Saxony, housed in an iconic building designed by the renowned architect Daniel Libeskind. The museum presents the life and work of the German-Jewish surrealist painter Felix Nussbaum, born in Osnabrück and later murdered by the Nazis in Auschwitz in 1944.

Kunstmuseum Bochum is an Art Museum in the German city of Bochum, close to Cologne and Düsseldorf. As a State Museum for Contemporary Art it was founded in 1960, just 15 years after World War II. It contains a collection of international Art from 1900 through the present. 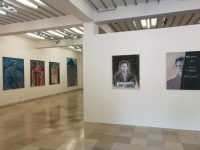 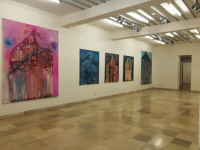 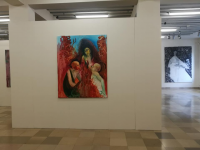