North Myrtle Beach, SC -- (ReleaseWire) -- 08/08/2011 --Satan’s Best Friend (ISBN: 978-1-58909-914-2), a novel just released by Bookstand Publishing, is a powerful exploration of cults, cult mentality, and how easily on which the young and impressionable are preyed upon by manipulative leaders.

“I’ve attempted to tell the story of cult life from several perspectives but especially from the perspective of the cult leader,” says author Darlene Eichler. “The majority of cult leaders are not born that way; although in most cases the tendencies toward narcissism and a burning need to control others is fed by underlying causes such as abuse, be it sexual, physical or psychological.”

Satan’s Best Friend tells the story of “Preacher Pat,” who as a child is abused physically and sexually by those very adults who should be guiding her in becoming a normal, happy child. Instead she becomes a bitter victim, scarred for life, promising herself as an adult no one will ever control her and she becomes the leader of a manipulative and dangerous cult.

Eichler’s personal experience in losing her son to a cult for sixteen years, where his family remains, adds many layers of depth and inner knowledge to the workings of the cult, cult leader, cult members, and the families of those who have lost loved ones to a cult.

Eichler is also the author of the "Rose Series" and "Trunk Tales."

Satan’s Best Friend is available at: 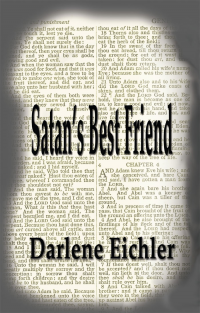