Plano, TX -- (ReleaseWire) -- 06/29/2018 --During the week of June 6 - 9, a team of five highly skilled and experienced doctors from the United States arrived in Haiti to participate in No-Scalpel Vasectomy International (NSVI). NSVI is a worldwide movement to start conversations about men's role in family planning, helping men and their families become more informed about their choices, and creating alliances with governments, organizations, and individuals willing to help train providers and educate families.

The purpose of the mission is not only to build greater awareness and acceptance of vasectomy as a safe and viable option for men whose family is complete, but to inspire men to be part of a broader conversation about male responsibility.

This is particularly important in developing nations such as Haiti where family planning is critical in addressing poverty and where there is a great need to have affordable and reliable family planning options. Effective family planning reduces the burden of poverty, hunger, homelessness, joblessness, unwanted pregnancies, and high maternal and infant mortality rates. The most common cause of death among women age 15-35 in developing countries are complications of pregnancy and delivery. Haiti has 10 million people and the population keeps growing and is projected to be nearly 70% larger by 2050. In 2010, when the earthquake hit Haiti, leaving hundreds of thousands dead, even more wounded and 1.5 million people homeless, providing relief proved to be very difficult under these conditions. Haiti is currently the poorest country in the Western Hemisphere.

With little to no access to birth control in Haiti, companies that manufacture birth control ignore such markets because of the poverty levels. Additionally, with 80% of the residents in the country living in poverty, even if birth control products were available, there is doubt as to their affordability and knowledge of existence and use.

With an average of 5 children per adult male in Haiti, Dr. Tim McAuliff of Gentle Procedures in Dallas, TX felt obligated to join the team of doctors in applying his skill and experience to help forward the cause. "The men of Haiti were so appreciative of our being there. 130 men (average age 47) who had a total of 658 children (average 5.1 children per man) took advantage of the free vasectomies we were providing. 75% of these men had all of their children with one wife, explaining they are merely looking for an opportunity to not further expand their family beyond 7 mouths to feed," says Dr. McAuliff.

Doctor Charles W. Monteith, Medical Director at A Personal Choice in Raleigh, NC who was one of the doctors accompanying Dr. McAuliff added, "I enjoyed working with NSVI and providing quality vasectomy services in the US and developing world. As an Ob/Gyn, I understand the impact unplanned pregnancy has on women, men and couples. Vasectomy has been greatly underutilized as a safe method of birth control in both the developed and developing world."

The team of doctors was joined by two Haitian doctors and Haitian medical staff such as nurses, counselors and interpreters who passed on post-surgery instructions and eased the language barrier. A surgical clinic was set up in Cap-Haïtien. Both Doctors McAuliff and Monteith, three other American doctors and two Haitian doctors worked all day long performing vasectomies under battery-operated headlamps due to the unreliable electric service in Haiti. Outages are commonplace and sometimes last for hours.

Overall, Dr. Tim McAuliff states, "This is a good way for doctors to utilize their expertise and allows American doctors to give back to less fortunate people in the world." Flyers were distributed ahead of time and posted in doctors' offices, the limited medical facilities, pharmacies, and even city walls to get the word out about the free vasectomies.

This trip is sponsored and conducted by NSVI (No-Scalpel Vasectomy International). The mission of NSVI is to promote and provide free No-Scalpel Vasectomy services worldwide, but especially in developing countries whose infrastructure and environmental resources are challenged by rapid population growth unchecked by established and/or effective family planning programs.

More can be learned about NSVI by visiting their website at https://www.nsvi.org.

Dr. Tim McAuliff is a highly-trained, world-renowned doctor who runs a Men's clinic in Dallas, TX where he performs revolutionary no scalpel, no needle vasectomies, infant and adult male circumcisions using a no-suture method, and frenulectomies for men. People from all over the United States travel to his clinic because of the positive patient reviews, less pain, faster healing time, and less expensive procedures for which he has become known. Gentle Procedures Clinic, located at 4104 W 15th St. suite 202, Plano, TX 75093 and Dr. Tim McAuliff can be reached at 469-931-0684 and by visiting their website at https://gentleproceduresdallas.com. 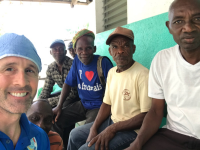 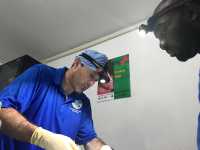