Stellar jazz musician brings high notes to a social cause

This year, our special guest is the very talented Cyrille Aimée, finalist in the 2010 Thelonious Monk Vocal Competition and an undeniable talent praised for her unparalleled vocal abilities. Cyrille's vocal stylings are synonymous with musical genius. Her culturally rich background has supplied her with the driving force of Dominican rhythm and the incredible swing of the French Gypsies.

Since 2007, Transdiaspora Network (TDN) has been crafting inventive strategies to tackle the spread of HIV in Brooklyn, which has the highest number of adolescents diagnosed with HIV/AIDS in the country. We work mostly with teens of Caribbean descent in underserved parts of the New York metropolitan area, between the ages of 14 and 18. We aim to create a different dialogue about prevention by using arts and culture as vehicles to promote open communication through our unique programs rooted in Afro-Caribbean dance, music, storytelling and photography. In fact, MediaGlobal, a United Nations-based news agency, says, “Transdiaspora Network takes the lead in the HIV prevention revolution among transplanted Caribbean youth in New York City.” Mobilizing youth-serving and youth-led organizations is at the core of developing efficient and sustainable HIV prevention programs. “Ultimately, the goal is for the youth themselves to be the promoters of a culture of prevention” said TDN Executive Director Ariel Rojas.

General Admission tickets are available now for $25 until May 11th. Benefit tickets include concert, raffle, and world music afterparty. Also, invitees can enjoy a $4 special hour of Proseco from 7:00pm to 8:00pm. Any donations made before, during, or after the concert are 100% tax-deductible. 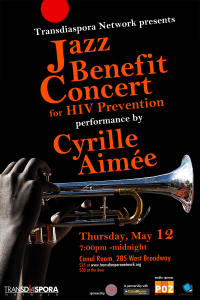